Last night Nicaragua’s Momotombo started its first eruption since 1905. The vigorous Strombolian eruption (see above and below) produced an impressive lava fountain along with a dark ash plume over the area near Lake Managua. Local reports suggest that people started feeling tremors and noticing steam plumes from Momotombo over the past few weeks. Then, late on Monday night, a new eruption began, sending incandescent volcanic debris cascading down the slopes of the volcano. By morning, the activity had waned, though a strong steam plume can still be spotted coming from the volcano on the INETER webcam pointed at Momotombo. At least six communities around Momotombo reported ash fall and as a precaution, schools in the region have been closed.


Momotombo has rumbled occasionally since its last confirmed eruption in 1905. As recently as 2003-2011, the volcano experienced a series of small seismic swarms that suggested magma moving in the system beneath the volcano. In 2007, the hydrothermal system in the summit crater began to heat as well, so this eruption may be the culmination of over a decade’s worth of priming in the magmatic system. 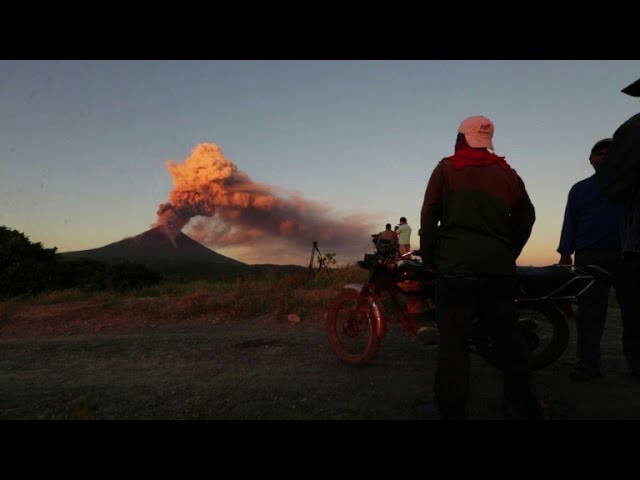 Up until 1905, Momotombo was one of Nicaragua’s most active volcanoes. Between 1849-1905, the volcano produced 10 eruptions and in 1605, Momotombo had a major eruption that destroyed the then-capital of the region, Leon Viejo.


This has been a noisy week for volcanoes in Central America. Fuego and Santiaguito in Guatemala both had moderate eruptions, with Fuego’s in particular producing an impressive lava fountain. Meanwhile, a small ash plume was spotted earlier in November from Telica, one of Nicaragua’s other active volcanoes, as part of its restless 2015. None of these volcanoes are connected in any way beyond the fact that they lie in the same tectonic setting, where the Cocos Plate is subducting beneath the Caribbean Plate.