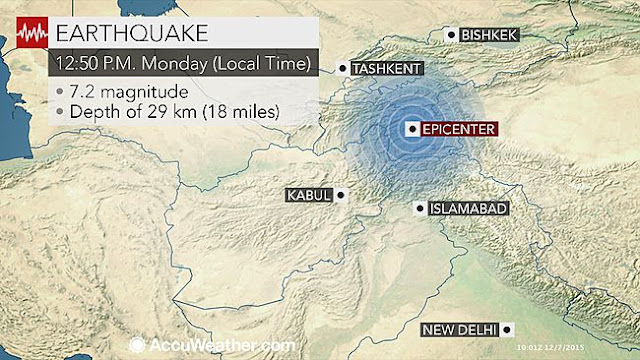 The 7.2-magnitude earthquake struck at 12:50 p.m. local time on Monday in the most sparsely populated area of Tajikistan in the Hindu Kush Mountains, the United States Geological Survey (USGS) reported.

The earthquake's epicenter was located 109 kilometers (68 miles) west of Murghob, Tajikistan and 133 kilometers (83 miles) northeast of Khorugh, Tajikistan. The depth of the quake was 29 kilometers (18 miles).

Aftershocks have been felt following the initial quake.

A 4.8-magnitude aftershock occurred in the same location as the 7.2-magnitude quake at 1:24 p.m. local time Monday.

In Krygyzstan, a magnitude-5.5 earthquake was centered 29 kilometers (18 miles) south-southeast of Chayek.

There are no reports of structural damage or injuries at this time.

This quake projected to have been felt by over 8 million people with the majority far enough away to have minimal to no structural damage.

"A few showers will occur across the lower elevations of Tajikistan on Tuesday," AccuWeather Meteorologist Eric Leister said. "A storm system will approach on Wednesday bringing cooler air and more significant snowfall to the country."

Further snowfall is expected into Thursday before an extended period of dry and cold weather begins on Friday.
see also: Causes of Afghanistan and Pakistan Earthquake 2015