sharks thriving in the scalding waters of an underwater volcano 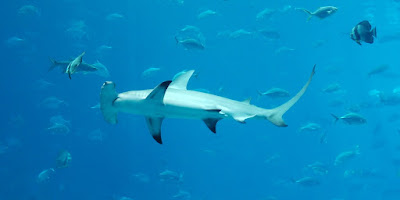 New research shows at least two species of sharks living in the hot, acidic water around Kavachi, an active underwater volcano in the Pacific Ocean.

This new National Geographic video was taken by an 80-pound robot dropped into the Kavachi crater to search for life. Among other life, researchers were surprised to discover hammerhead and silky sharks in the area.

It wasn't just one or two sharks. They are "there in numbers."

“These large animals are living in what you have to assume is much hotter and much more acidic water, and they’re just hanging out,” said Brennan Phillips, an engineer whose expedition is funded by the National Geographic Society. “It makes you question what type of extreme environment these animals are adapted to. What sort of changes have they undergone? Are there only certain animals that can withstand it? It is so black and white when you see a human being not able to get anywhere near where these sharks are able to go.”

Jellyfish, skate, and snappers were also spotted in the crater. The water around the volcano is extremely hot and dangerous even when no eruption is taking place. Humans can get skin burns from the acidic water at any time.

The big question is, how can animals like a hammerhead shark live in such dangerous waters right next to a huge active volcano? Do they have "an early warning system" or do they "blow up sky high in little bits?"