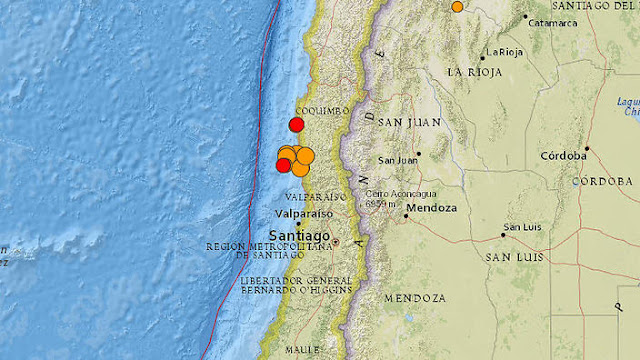 A strong 6.9-magnitude earthquake struck off the coast of central Chile late Tuesday but there was no immediate tsunami alert, US seismologists said.

The epicenter of the quake was near the coast, about 93 kilometers (57 miles) northwest of Coquimbo, said the US Geological Survey (USGS). It initially gave the magnitude as 6.6.

The Pacific Tsunami Warning Center said there was no tsunami threat from the quake, which struck at 8:54 pm (0154 GMT Wednesday) at a depth of 10 kilometers.

Chile is no stranger to earthquakes.

In September, the same area of the country was hit by an 8.3-magnitude earthquake and tsunami that left 15 dead and over 16,000 homeless.

In February 2010, an 8.8-magnitude quake off the southern Chilean coast killed more than 500 people and inflicted an estimated $30 billion in damage.

Chile lies on what is known as the "Ring of Fire" -- an arc of fault lines that circles the Pacific Basin and is prone to frequent earthquakes and volcanic eruptions.