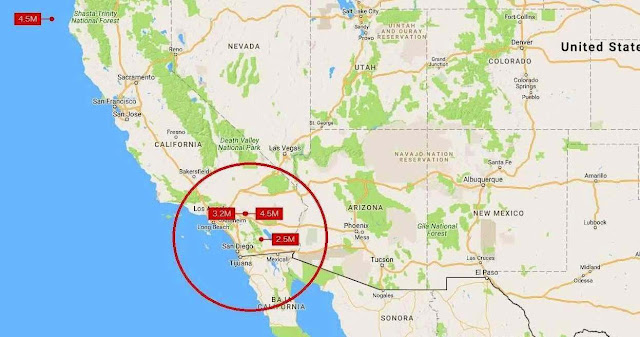 A series of four temblors struck California in about 12 hours, two of them near the small town of Cabazon, according to the US Geological Survey.

Just before 5 a.m. (8 a.m. ET) Tuesday, two small earthquakes struck within minutes of each other, roughly 7 miles north of the Southern California city of 4,000. Cabazon is about 45 miles east of the Los Angeles suburb, Riverside.
The first quake was a 4.5 magnitude, while the second was a 3.2, the USGS reported.

Residents in San Diego, 95 miles south of the 4.5 magnitude quake, felt the "initial jolt," according to CNN affiliate KNBC.
About 12 hours earlier, two more temblors hit opposite ends of the Golden State.

The first, occurring around 5:39 p.m. (8:39 p.m. ET) Monday, hit a few miles east of Ocotillo Wells, about 50 miles north of the Mexico border. This quake was the smallest of the bunch, registering at 2.5 magnitude.

Roughly an hour before the Ocotillo Wells temblor, a 4.5 magnitude quake hit in the Pacific Ocean, 56 miles west of the Northern California town of Ferndale. The city of 1,400 is known for its Victorian homes and storefronts and is considered the gateway to California's Lost Coast.
All four temblors struck at a depth of about 7 to 10 miles, which seismologists consider shallow. Quakes between 2.5 to 5.4 are relatively frequent (30,000 a year) and can cause minor damage.