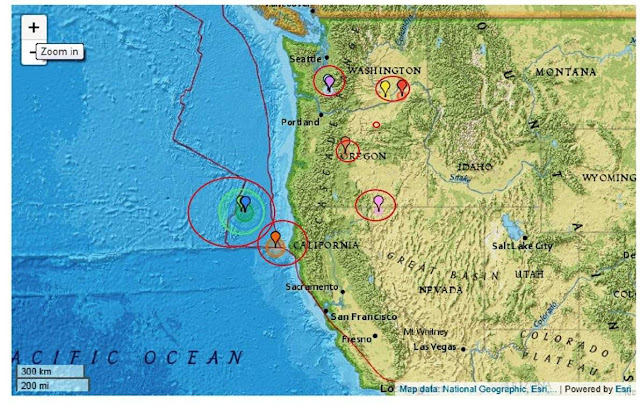 Eleven earthquakes ranging from 2.8 to 5.6 magnitudes were reported off Oregon's southern coast Tuesday morning, according to the U.S. Geological Survey.

As of 9 a.m., six more earthquakes were detected in the same area hours later ranging from 3.2 to 5.6. All the quakes were about six miles deep.

The plate was basically being scrunched by the ones around it and broke.

"For sure there is some squeezing happening," he said.

But does all that squeezing mean a bigger quake is next? Could it trigger a Cascadia Subduction Zone quake?

The Cascadia Subduction Zone is a roughly 600 mile long fault off Oregon and Washington's coast. It's the point where the ocean plate and the North American plate are locked together. And when they finally release, it will create not only a tsunami but also a large earthquake.

The good news, when it comes to a Cascadia Subduction Zone quake, Moran said the swarm is in no way a precursor.

"If there was something leading toward this... we would expect to see those earthquakes lining up much more along the subduction zone itself in the area where the big earthquake would release," he said.

Moran said the quake swarm does show the plates offshore are active, which means the Cascadia fault is likely active too.

The last big earthquake to hit our area was 317 years ago. Scientists say we are about due for another one.

"There's about a one in three chance of a large earthquake happening along the Cascadia fault in the next 50 years," said Moran.
Share to: