We could exploit energy from deep down in the earth, as a report from a geothermal borehole suggests. The project developed under the name of Icelandic Deep Drilling Project (also known as IDDP), and the shafts have been drilled to almost five kilometers deep, with the purpose of harnessing the heat in the volcanic bedrock very deeply under the surface of Island. 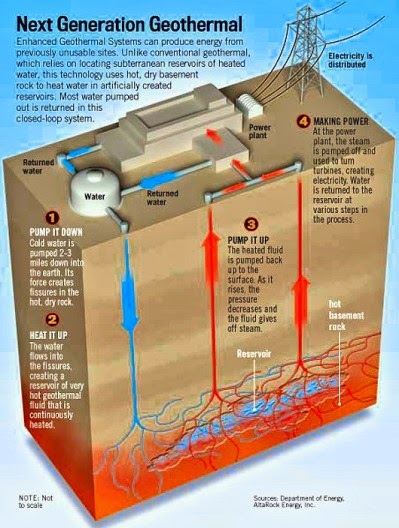 The conclusions of this research are very important because of the estimations of the fossil fuels that will eventually run out. Even though there are ten to thirty years differences in predictions, depending on the source of the anticipations, coal gas and oil are about to end, point in which alternative energy sources will become a must for every country.

The main difference between the first and the second time when the magma was hit was the attempt to harness the energy of the magma. Of course, the success of the drilling procedure was as amazingly good news as it was pretty unpredictable, nonetheless a great thesis for future investigations.

The previous attempt was back in 2009, when the borehole in the northeast Iceland location Krafla was only 2,1 thousand meters high stroke a pocket of magma unexpectedly infringing into the upper crust from below, at an approximate temperature within the range of 900 – 1000°C. After this incident, the purpose of the further investigations became highly increasing the energy resources of the country through the production of deep, supercritical geothermal fluids. A positive result of the investigation could lead to the possibility of increasing the power outputs of the geothermal wells that are suitable by magnitude, with no environmental foot prints increase rate.

Concerning the frequency of the phenomenon, ‘[d]rilling into magma is a very rare occurrence and this is only the second known instance anywhere in the world’, declared Wilfred Elders, co-author of the research papers and professor emeritus of geology at the University of California. He also declared that the IDDP and Iceland’s National Power Company conducting the Krafla geothermal power plant in the proximity are willing to make major investments for the research to continue until the conclusions will allow them to exploit the resources with appropriate new technologies.

Another source of great news for Iceland is the high concentration of volcanoes which, if found to be exploitable on a large scale, can be the source of enormous amounts of energy, that can be used to be transformed into electricity and further taken advantage of on industrial or even domestic level. Wilfred Elders also stated that ‘this could lead to a revolution in the energy efficiency of high-temperature geothermal projects in the future.’

The magma-heated steam is capable of producing 36 MW of electrical power, as the measurements have shown. In comparison with a standard 660 MW coal-fired power station this isn’t the most efficient source of energy, but it nonetheless registers way above the 1-3 MW of a standard wind turbine.
Share to: