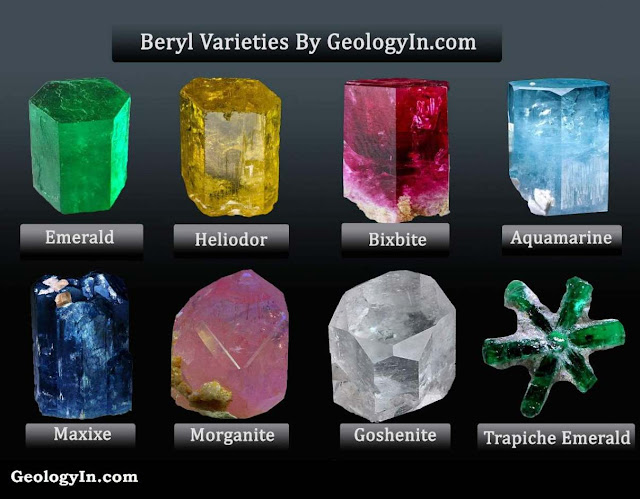 Beryl is a mineral composed of beryllium aluminium cyclosilicate with the chemical formula Be3Al2(SiO3)6  Beryl is a single mineral with many varieties that are distinguished by their color.  Well-known varieties of beryl include emerald and aquamarine.

There are six well known types of beryl. Each type is known because of its distinctive color. The six different types of beryl include aquamarine, bixbite, emerald, goshenite, heliodor, and morganite. Of all of the varieties, emerald and aquamarine are the most sought after for their great beauty as gemstones (Beryl).

Aquamarine is a light bluish green form of beryl. Its specific color comes from impurities of iron that lie within the beryl. The exact color of the aquamarine itself is dependent on where the impurities are located in the beryl. Aquamarine can be a very expensive gemstone. The most sought after color is pure blue.

The pale blue color of aquamarine is attributed to Fe2+. Fe3+ ions produce golden-yellow color, and when both Fe3+ and Fe2+ are present, the color is a darker blue as in maxixe. Decoloration of maxixe by light or heat thus may be due to the charge transfer between Fe3+ and Fe2+.


The deep blue version of aquamarine is called maxixe. Maxixe is commonly found in the country of Madagascar. Its color fades to white when exposed to sunlight or is subjected to heat treatment, though the color returns with irradiation.

Red beryl is an extremely rare variety of beryl that receives its red color from trace amounts of manganese. In the entire world, crystals suitable for cutting gems have been found in only one location, the Ruby-Violet claims in the Wah Wah Mountains of Beaver County, Utah. The Utah Geological Survey estimated that one crystal of red beryl is found for every 150,000 gem-quality diamonds.

Red beryl is very rare and has been reported only from a handful of locations: Wah Wah Mountains, Beaver County, Utah; Paramount Canyon and Round Mountain, Sierra County, New Mexico, although the latter locality does not often produce gem grade stones; and Juab County, Utah.

Emerald is the green variety of Beryl, and its most precious and valuable variety. Its intense green color has given it status as an important gemstone throughout the centuries. The color of Emerald is green to emerald-green. The light green form of Beryl is not recognized as Emerald, but rather Green Beryl. The deep color of Emerald is caused by traces of the element chromium, but sometimes also vanadium.


Emeralds can be transparent and gemmy, in which case they are extremely valuable, or they can be in opaque or semi-opaque forms which are much more common and not as valuable.


A rare type of emerald known as a Trapiche emerald is occasionally found in the mines of Colombia. A trapiche emerald exhibits a "star" pattern; it has raylike spokes of dark carbon impurities that give the emerald a six-pointed radial pattern.


Colorless beryl is called goshenite. The name originates from Goshen, Massachusetts, where it was originally discovered. Since all these color varieties are caused by impurities and pure beryl is colorless, it might be tempting to assume that goshenite is the purest variety of beryl. However, there are several elements that can act as inhibitors to color in beryl and so this assumption may not always be true.

The gem value of goshenite is relatively low. However, goshenite can be colored yellow, green, pink, blue and in intermediate colors by irradiating it with high-energy particles. The resulting color depends on the content of Ca, Sc, Ti, V, Fe, and Co impurities.


Golden beryl can range in colors from pale yellow to a brilliant gold. The term Heliodor may also be used to describe light green, orange, and brown Beryl, and can be interchangeable with Golden Beryl.
The term "golden beryl" is sometimes synonymous with heliodor. but golden beryl refers to pure yellow or golden yellow shades, while heliodor refers to the greenish-yellow shades. The golden yellow color is attributed to Fe3+  ions. Both golden beryl and heliodor are used as gems.

Morganite, also known as "pink beryl", is a rare light pink to rose-colored gem-quality variety of beryl. Orange/yellow varieties of morganite can also be found, and color banding is common. It can be routinely heat treated to remove patches of yellow and is occasionally treated by irradiation to improve its color. The pink color of morganite is attributed to Mn2+ ions.


Read also:
How to Identify Common Minerals?
Types of Mineral Inclusions with Photos
Types of agate with photos

Interesting Facts about Rhodochrosite with Amazing Photos
Share to: