The Major Varieties of Quartz (Photos)


There are many different varieties of quartz, several of which are semi-precious gemstones. Since antiquity, varieties of quartz have been the most commonly used minerals in the making of jewelry and hardstone carvings, especially in Europe and the Middle East. 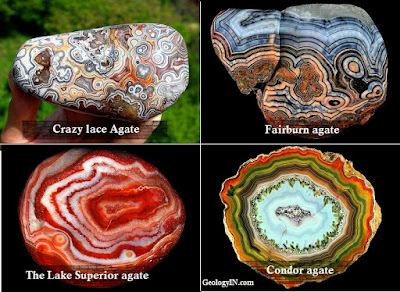 Agate Multi-colored, banded chalcedony, semi-translucent to translucen. Although agates may be found in various kinds of rock, they are classically associated with volcanic rocks and can be common in certain metamorphic rocks.


Onyx Agate where the bands are straight, parallel and consistent in size.


Jasper Opaque cryptocrystalline quartz, typically red to brow. The common red color is due to iron(III) inclusions. The mineral aggregate breaks with a smooth surface and is used for ornamentation or as a gemstone.

It is a classic example of pseudomorphous replacement by silica of fibrous crocidolite (blue asbestos). An incompletely silicified blue variant is known as hawk's eye.
Aventurine Translucent chalcedony with small inclusions (usually mica) that shimmer. The most common colour of aventurine is green, but it may also be orange, brown, yellow, blue, or gray. Chrome-bearing fuchsite (a variety of muscovite mica) is the classic inclusion, and gives a silvery green or blue sheen.


Amethyst Purple, transparent. Amethyst is a semiprecious stone and is the traditional birthstone for February.


Citrine is a variety of quartz whose color ranges from a pale yellow to brown due to ferric impurities. Natural citrines are rare; most commercial citrines are heat-treated amethysts or smoky quartzes.


Rose quartz Pink, translucent, may display diasteris. The color is usually considered as due to trace amounts of titanium, iron, or manganese, in the massive material.


Milky quartz White, translucent to opaque, may display diasterism. Milky quartz is the most common variety of crystalline quartz. The white color is caused by minute fluid inclusions of gas, liquid, or both, trapped during crystal formation, making it of little value for optical and quality gemstone applications


Smoky quartz is a gray, translucent version of quartz. It ranges in clarity from almost complete transparency to a brownish-gray crystal that is almost opaque. Some can also be black.


Carnelian Reddish orange chalcedony, translucen. The color can vary greatly, ranging from pale orange to an intense almost-black coloration. Similar to carnelian is sard, which is generally harder and darker.

Chalcedony Cryptocrystalline quartz and moganite mixture. The term is generally only used for white or lightly colored material. Otherwise more specific names are used. Chalcedony has a waxy luster, and may be semitransparent or translucent. It can assume a wide range of colors, but those most commonly seen are white to gray, grayish-blue or a shade of brown ranging from pale to nearly black.

Mtorolite is a green variety of chalcedony, which has been colored by chromium. Also known as chrome chalcedony, it is principally found in Zimbabwe.

Chrysoprase is a green variety of chalcedony, which has been colored by nickel oxide. Its color is normally apple-green, but varies to deep green. Chrysoprase is cryptocrystalline, which means that it is composed of crystals so fine that they cannot be seen as distinct particles under normal magnification.


Heliotrope is a green variety of chalcedony, containing red inclusions of iron oxide that resemble drops of blood, giving heliotrope its alternative name of bloodstone.

See also How Do Agates Form?
Types of agate with photos
Types of Mineral Inclusions with Photos
Why Fluorite Comes in Different Colors? With Examples
Share to: