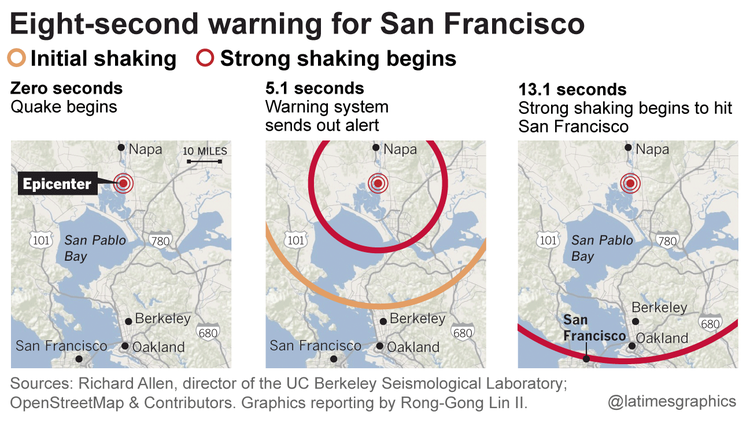 The ambitious plan highlights the progress scientists have made in building out the system, which can give as much as a minute of warning before a major earthquake is felt in metropolitan areas.

Until now, only academics, select government agencies and a few private firms have received the alerts. But officials said they are building a new, robust central processing system and now have enough ground sensors in the Los Angeles and San Francisco areas to widen access. They stressed the system is far from perfected but said expanded access will help determine how it works and identify problems.

8-second warning for San Francisco
The warnings would allow fire stations to get garage doors open before a quake can jam them shut, instruct students to duck and cover, and, eventually, automatically shut off sensitive equipment at private companies and tell surgeons to halt surgery. When the data is more reliable, even amusement parks could have time to shut down rides.

The prospect of expanding the system — which is dependent on federal funding coming through — has brought excitement for both emergency officials and some businesses. Even a few seconds' notice to duck under a sturdy desk could be a matter of surviving a building's collapse, fire officials said.

In Japan, one semiconductor firm that lost more than $15 million in quake damage in 2003 installed machines to automatically shut down sensitive equipment that etches circuit boards. When much larger quakes hit later, the company lost only $200,000.

The prototype developed by the U.S. Geological Survey and universities including Caltech and UC Berkeley has scored a series of successes, generating alerts in Pasadena before shaking arrived from the 4.4 Encino, 5.1 La Habra and 4.2 Westwood earthquakes earlier this year. San Francisco got eight seconds of warning before strong shaking arrived from the 6.0 Napa earthquake in August.

More money is still needed to install sensors across the state and improve the computer programming. The system struggled during the recent swarm of earthquakes in the Mammoth Lakes area.

It's still the "duct-tape and baling-wire version of it, which we've been watching for two years," Doug Given, earthquake early warning coordinator for the USGS, said. "Sometimes, it does make mistakes. We want to make sure it doesn't do that."

The 2015 rollout would be ready as long as Congress approves funding. Committees in both the U.S. Senate and House of Representatives have already approved $5 million for the fiscal year that began in October, but a full vote on the budget was put off until after this month's election. The system needs $16.1 million a year to be completed and maintained.

"This is proven technology that will save lives and reduce the economic impact of an earthquake. It simply needs to be properly funded," Rep.
The West Coast of the United States has lagged far behind other countries such as Japan, Taiwan, Mexico and Turkey, which had warning systems built after large earthquakes killed thousands of people. The last California temblor that killed thousands was the great San Francisco earthquake in 1906, which was estimated at 7.7 to 8.3.

The early warning system works on a simple principle: The shaking from an earthquake travels at about the speed of sound — slower than the speed of light. That means

The USGS has begun sharing the prototype early warnings with private companies who want to invent machines that trigger automatic safety actions.

One idea is to hook up warnings to the public announcement system at a select number of interested schools to warn students and teachers to drop, cover and hold on before the shaking arrives.

In Universal City, county firefighters tested the early warning network. In September, the station's garage doors automatically opened after an automated system got the signal of a simulated earthquake.

"The last thing you want is to have your trucks trapped inside the fire station and have to take another 10 or 15 minutes to physically cut those doors open," said county fire Battalion Chief Larry Collins.

The system, developed by Early Warning Labs of Santa Monica, also could eventually activate the emergency power at a hospital or open up elevator doors at the nearest floor before shaking begins.

The company has developed a smartphone app, QuakeAlert, that researchers have used to get the warnings, which Early Warning Labs wants to make available to the public for free, according to the firm's chief executive, Josh Bashioum.
Meanwhile, Louisiana-based Global Security Systems has designed a machine that would be like a weather radio for earthquakes, listening to warnings carried over a commercial FM radio frequency and then flashing a strobe light or sounding an alarm.
That firm already sells an Alert FM device that issues warnings for hurricanes and tornadoes. A home version costs about $35, while a $300 version could be installed in malls or offices and issue voice commands on what to do. "We can have this deployed in California in less than nine months" once the data is ready, said Matthew Straeb, Global Security Systems' executive vice president.
Officials are still developing city-wide alerts.

The city of San Francisco would like to eventually broadcast alerts to the public by phone and text message, and possibly on the 112 sirens throughout the city, which now go off only sparingly, like for tsunami warnings, said Francis Zamora of the city's emergency management department.
To finish a West Coast network, California needs to more than double its network of 400 sensor stations - mostly in areas outside of Southern California. An additional 275 stations are needed to roll out the network in Oregon and Washington, Given said.

Having a broad network of sensors is critical to a properly functioning network.
"If you don't have enough sensors, then what happens? The software doesn't work," said Caltech seismologist Egill Hauksson.

While the $5 million is needed for the current fiscal year, lawmakers have asked Obama to propose in his next budget $16.1 million annually starting in the next fiscal year, which would be enough money to build and maintain the system for the entire West Coast.