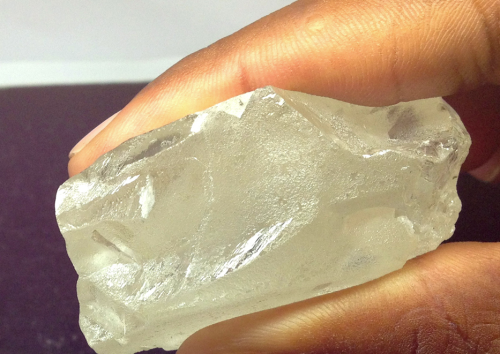 The largest uncut diamond ever found was the Cullinan, discovered in 1905 about 18 feet below ground in the walls of the Premier diamond mine, about 24 miles east of Pretoria, South Africa.
The magnificent stone was weighed, and replicas were made before it was cut into nine major gems and 96 small gems. The largest was 530.4 carats — slightly less than one-quarter pound — and was named the Great Star of Africa. It and its smaller cousin — the 317.3-carat Lesser Star of Africa — are mounted in the British Crown Jewels.
Before cutting, the stone weighed a whopping 3,106.75 carats — more than 1.3 pounds — but it was not a complete crystal.
Most diamonds occur as crystals with a characteristic shape called an octahedron — think of two four-sided pyramids stuck together at their bottoms. The Cullinan was obviously part of such a crystal — it had a curved surface and triangular shaped depressions characteristic of many diamond crystals — but it was only about one-third of an octahedron.
A recent article in The Mineralogical Record reconstructed the original diamond crystal.
Using a replica of the original replica, the missing portions of the crystal were filled in with clay. The results were striking — an octahedron measuring about 4 inches on each side. The original crystal might have weighed around 8,300 carats, or more than 3.5 pounds.
So where’s the rest of it?
The crystal probably was fragmented by the explosive emplacement of the diamond pipe lava, which traveled from 100 miles below ground at supersonic speed some 1.2 billion years ago. It brought with it diamonds that might have formed as long ago as 3 billion years.
(That’s one reason the idea that diamonds are compressed coal is a myth — coal comes from ancient trees, and there were no trees that far back in time.)
The Premier Mine has produced quite a number of other large diamonds, so some fragments might have been recovered during earlier or later mining and not recognized as parts of the Cullinan.
Other parts might have been transported farther up the pipe, exposed at the surface and carried away by erosion millennia before mining ever started. Alternatively, some might still lie buried miles below the surface and will never be recovered.
Or maybe tomorrow’s Dispatch will carry the news that another major fragment of this magnificent stone finally has been found.

Dale Gnidovec is curator of the Orton Geological Museum at Ohio State University.
Share to: