The fossil record consists of a number of different organisms that have been preserved for our analysis in many different ways. We will be examining some of these modes (types) of preservation.

The most rare type of fossil preservation is where unaltered soft parts are preserved. As we have discussed, the preservation of soft parts is rare because of how easily this type of material decays. In order to preserve fossils in this way, the dead organism must be mummified in one way or another; that is, the organism must be entirely removed from any exposure to oxygen, wind, air, water, etc. almost immediately after its death. Some examples of mummification include the preservation of organisms in ice, amber, peat, tar, etc. in which the organism is completely surrounded by a seal of the preserving agent and restricted from decay. In very rare cases, an organism may desiccate (i.e. completely dry out) in a desert and fail to undergo any decay processes.

We can also preserve unaltered hard parts. This occurs when some portion of the organism is preserved just as it was in life. Some examples of unaltered hard parts would be aragonite or calcite in marine invertebrate shells (that still looks opalescent and unaltered), silica in some marine corals, hydroxyapatite in vertebrate bones, and chitin (the crunchy part of a beetle) of insects. More often, however, we preserve fossils by altering the remnant in some fashion. When this occurs, we preserve fossils as altered hard or soft parts. This can occur in several different ways:


(a) Recrystallization (altered hard part) - In this type of preservation, the mineral composition of original hard part is recrystallized. No change in chemistry occurs; there is simply a change in atomic structure of the elements. During this process, microscopic crystal structure and internal detail of the fossil is lost; however, external details may be preserved. A good example of this process can be seen in marine invertebrate shells that have been altered from shiny mother-of-pearl looking aragonite into the more dull-looking calcite.

(b) Replacement (altered hard part) - In this type of preservation, the mineral composition of the fossil is replaced by another mineral. This process sometimes maintains the internal structure of the fossil (e.g. ridges, etc. on the fossil surface). A good example of this is the replacement of wood by silica (in petrified wood) prior to the wood’s pore space being filled; this process is called silicification. Another example is the complete replacement of calcite or apatite by pyrite in some shells and bones; this process is called pyritization.

(c) Permineralization (altered hard part) - This process, which is quite similar to cementation in sedimentary rocks, occurs when the empty spaces within bone/shell are filled with another mineral to make it harder and more resistant. As with rocks, the most common permineralizing agents are silica (SiO2) and calcite (CaCO3). In this case, permineralization can occur where the original material still exists and only the pore space is filled, like when vertebrate bones are filled with silica, or it can occur where the original hard parts have already been recrystallized or replaced like when empty
pore space within replaced wood is filled.

(d) Carbonization (altered soft part) - This type of preservation occurs when the majority of the organism breaks down and only a thin film of dark black carbon or organic residue is left behind, leaving carbonized traces or outlines of the organism on the faces of shale beds. This process occurs most frequently with leaves and fish. An additional way that we can preserve the morphological (body structure) characteristics of an organism is by preserving it as a mold or cast (Figure ). During this process, the original organism is usually destroyed, but an accurate and detailed impression of its external or internal characteristics is preserved. A mold is an impression left behind by an organism or its body. In our example, the external mold preserves the details of the outside of the clam’s shells, whereas the internal mold (also called a steinkern) preserves the detail of the internal surface of the clam (like notches where the muscle would have connected, etc.) It must be noted that although the internal mold is filling in the clam, it is still a mold, due to the fact that it is mirroring surface features of what it fills. External molds are relatively more common than internal. One example of an external mold would be the unfilled voids left behind after the bodies of those who died during the 79 A.D. eruption of Pompeii had decayed. The cast, then, is what results from filling in a mold. The structure produced will look exactly like the original feature (i.e. it will have dips where the original had dips and bumps where the original had bumps). The plaster-of-Paris models of the inhabitants of Pompeii shown on many TV programs are casts. This concept of a cast is only slightly different from the preservation of sedimentary structures as casts in which we produced a reversed image (remember mudcrack casts were bumps whereas the original structure was an impression); however, the idea is the same. In each case, we are filling the original structure with a resistant deposit. 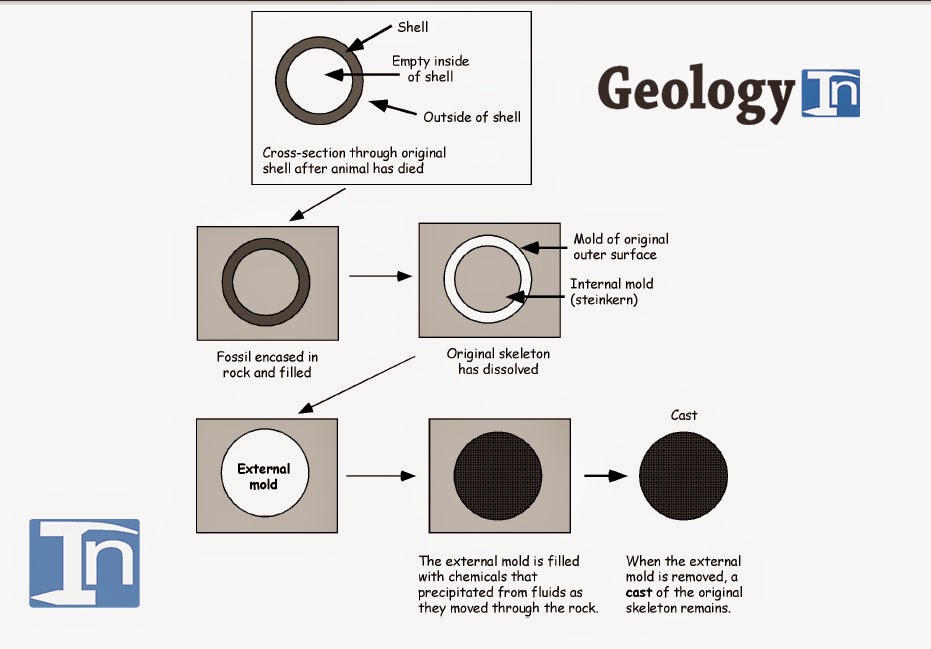