2011 Japan earthquake: Fault had been relieving stress at accelerating rate for years 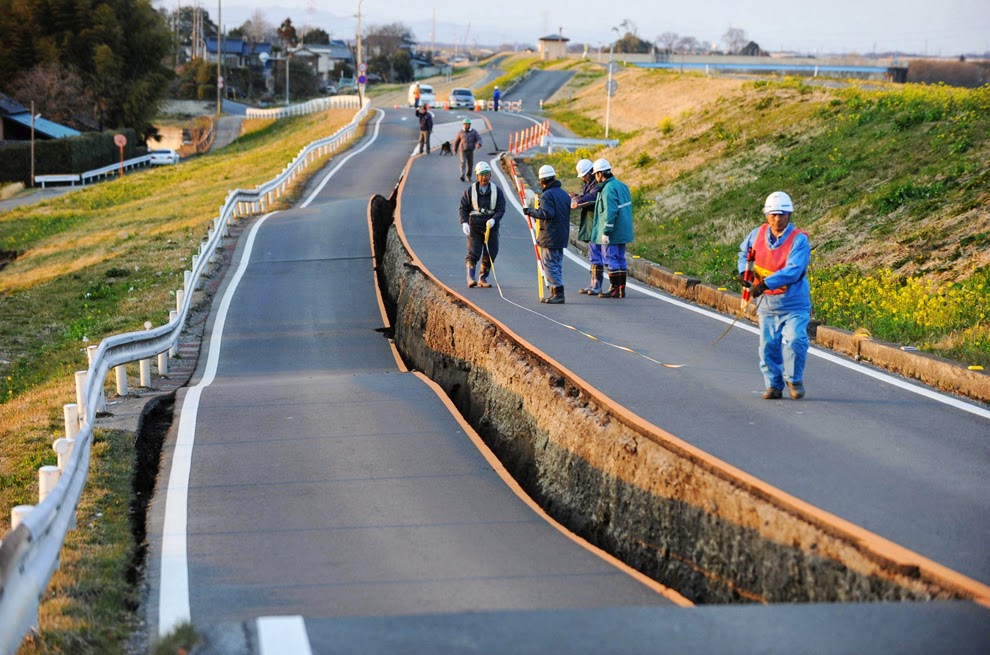 This "decoupling" process, in which the edges of two tectonic plates that are frictionally locked together slowly became unstuck, transferred stress to adjacent sections that were still locked. As a result, the quake, which was the most powerful ever recorded to hit Japan, may have occurred earlier than it might have otherwise, said Andreas Mavrommatis, a graduate student in Stanford's School of Earth Sciences.
Mavrommatis and his advisor, Paul Segall, a professor of geophysics at Stanford, reached their conclusions after analyzing 15 years' worth of GPS measurements from the Japanese island of Honshu. Their results were published earlier this year in the journal Geophysical Research Letters.
"We looked at northeastern Japan, which has one of the densest and longest running high-precision GPS networks in the world," Mavrommatis said.
Segall said, "The measurements indicated the plate boundary was gradually becoming less locked over time. That was surprising."
The scientists will present their work, "Decadal-Scale Decoupling of the Japan Trench Prior to the 2011 Tohoku-Oki Earthquake from Geodetic and Repeating-Earthquake Observations," Dec. 17 at the American Geophysical Union's Fall Meeting in San Francisco. The talk will take place at 5 p.m. PT at the Moscone Convention Center in Moscone South, Room 306.
The pair's hypothesis is further supported by a recent analysis they conducted of so-called repeating earthquakes offshore of northern Honshu. The small quakes, which were typically magnitude 3 or 4, occurred along the entire length of the fault line, but each one occurred at the same spot every few years. Furthermore, many of them were repeating not at a constant but an accelerating rate, the scientists found. This acceleration would be expected if the fault were becoming less locked over time, Mavrommatis said, because the decoupling process would have relieved pent-up stress along some sections of the fault but increased stress on adjacent sections.
"According to our model, the decoupling process would have had the effect of adding stress to the section of the fault that nucleated the Tohoku quake," Segall said. "We suspect this could have accelerated the occurrence of the earthquake."
The scientists caution that their results cannot be used to predict the occurrence of the next major earthquake in Japan, but it could shed light on the physical processes that operate on faults that generate the world's largest quakes.

The above story is based on materials provided by Stanford University. Note: Materials may be edited for content and length.