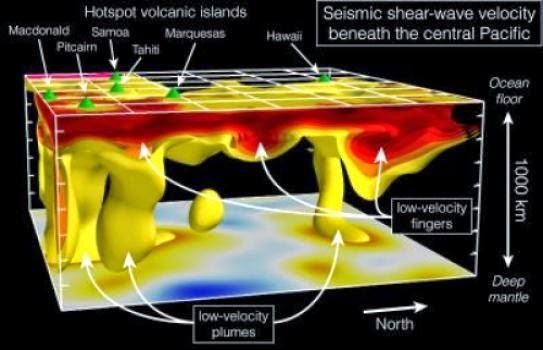 Many volcanoes arise at collision zones between the tectonic plates, but hotspot volcanoes form in the middle of the plates. Geologists have hypothesized that upwellings of hot, buoyant rock rise as plumes from deep within Earth's mantle -- the layer between the crust and the core that makes up most of Earth's volume -- and supply the heat that feeds these mid-plate volcanoes.
But some hotspot volcano chains are not easily explained by this simple model, a fact which suggests there are more complex interactions between these hot plumes and the upper mantle. Now, a computer modeling approach, developed by University of Maryland seismologist Vedran Lekic and colleagues at the University of California Berkeley, has produced new seismic wave imagery which reveals that the rising plumes are, in fact, influenced by a pattern of finger-like structures carrying heat deep beneath Earth's oceanic plates.
Seismic waves are waves of energy produced by earthquakes, explosions and volcanic eruptions, which can travel long distances below Earth's surface. As they travel through layers of different density and elasticity, their shape changes. A global network of seismographs records these changing waveforms. By comparing the waveforms from hundreds of earthquakes recorded at locations around the world, scientists can make inferences about the structures through which the seismic waves have traveled.
The process, known as seismic tomography, works in much the same way that CT scans (computed tomography) reveal structures hidden beneath the surface of the human body. But since we know much less about the structures below Earth's surface, seismic tomography isn't easy to interpret. "The Earth's crust varies a lot, and being able to represent that variation is difficult, much less the structure deeper below" said Lekic, an assistant professor of geology at the College Park campus.
Until recently, analyses like the one in the study would have taken up to 19 years of computer time. While studying for his doctorate with the study's senior author, UC Berkeley Prof. Barbara Romanowicz, Lekic developed a method to more accurately model waveform data while still keeping computer time manageable, which resulted in higher-resolution images of the interaction between the layers of Earth's mantle.
By refining this method, a research team led by UC Berkeley graduate student Scott French found finger-like channels of low-speed seismic waves flowing about 120 to 220 miles below the sea floor, and stretching out in bands about 700 miles wide and 1,400 miles apart. The researchers also discovered a subtle but important difference in speed: at this depth, seismic waves typically travel about 2.5 to 3 miles per second, but the average seismic velocity in the channels was 4 percent slower. Because higher temperatures slow down seismic waves, the researchers infer that the channels are hotter than the surrounding material.
"We estimate that the slowdown we're seeing could represent a temperature increase of up to 200 degrees Celsius," or about 390 degrees Fahrenheit, said French, the study's study lead author. At these depths, absolute temperatures in the mantle are about 1,300 degrees Celsius, or 2,400 degrees Fahrenheit, the researchers said.
Geophysicists have long theorized that channels akin to those revealed in the computer model exist, and are interacting with the plumes in Earth's mantle that feed hotspot volcanoes. But the new images reveal for the first time the extent, depth and shape of these channels. And they also show that the fingers align with the motion of the overlying tectonic plate. The researchers hypothesize that these channels may be interacting in complex ways with both the tectonic plates above them and the hot plumes rising from below.
"This global pattern of finger-like structures that we're seeing, which has not been documented before, appears to reflect interactions between the upwelling plumes and the motion of the overlying plates," Lekic said. "The deflection of the plumes into these finger-like channels represents an intermediate scale of convection in the mantle, between the large-scale circulation that drives plate motions and the smaller scale plumes, which we are now starting to image."
"The exact nature of those interactions will need further study," said French, "but we now have a clearer picture that can help us understand the 'plumbing' of Earth's mantle responsible for hotspot volcano islands like Tahiti, Reunion and Samoa."

The above story is based on materials provided by University of Maryland. Note: Materials may be edited for content and length.