The geology of the Moon (sometimes called selenology, although the latter term can refer more generally to "lunar science") is quite different from that of Earth. The Moon lacks a significant atmosphere, which eliminates erosion due to weather; it does not possess any form of plate tectonics, it has a lower gravity, and because of its small size, it cools more rapidly. The complex geomorphology of the lunar surface has been formed by a combination of processes, especially impact cratering and volcanism. The Moon is a differentiated body, possessing a crust, mantle and core.

Geological studies of the Moon are based on a combination of Earth-based telescope observations, measurements from orbiting spacecraft, lunar samples, and geophysical data. A few locations were sampled directly during the Apollo missions in the late 1960s and early 1970s, which returned approximately 385 kilograms of lunar rock and soil to Earth, as well as several missions of the Soviet Luna programme. The Moon is the only extraterrestrial body for which we possess samples with a known geologic context. A handful of lunar meteorites have been recognized on Earth, though their source craters on the Moon are unknown. A substantial portion of the lunar surface has not been explored, and a number of geological questions remain unanswered.

The geological history of the Moon has been defined into six major epochs, called the lunar geologic timescale. Starting about 4.5 billion years ago, the newly formed Moon was in a molten state and was orbiting much closer to Earth resulting in tidal forces. These tidal forces deformed the molten body into an ellipsoid, with the major axis pointed towards Earth.

The first important event in the geologic evolution of the Moon was the crystallization of the near global magma ocean. It is not known with certainty what its depth was, but several studies imply a depth of about 500 km or greater. The first minerals to form in this ocean were the iron and magnesium silicates olivine and pyroxene. Because these minerals were denser than the molten material around them, they sank. After crystallization was about 75% complete, less dense anorthositic plagioclase feldspar crystallized and floated, forming an anorthositic crust about 50 km in thickness. The majority of the magma ocean crystallized quickly (within about 100 million years or less), though the final remaining KREEP-rich magmas, which are highly enriched in incompatible and heat-producing elements, could have remained partially molten for several hundred million (or perhaps 1 billion) years. It appears that the final KREEP-rich magmas of the magma ocean eventually became concentrated within the region of Oceanus Procellarum and the Imbrium basin, a unique geologic province that is now known as the Procellarum KREEP Terrane.


Exploring Shorty Crater during the Apollo 17 mission to the Moon. This was the only Apollo mission to include a geologist (Harrison Schmitt). NASA photo

Quickly after the lunar crust formed, or even as it was forming, different types of magmas that would give rise to the Mg-suite norites and troctolites began to form, although the exact depths at which this occurred are not known precisely. Recent theories suggest that Mg-suite plutonism was largely confined to the region of the Procellarum KREEP Terrane, and that these magmas are genetically related to KREEP in some manner, though their origin is still highly debated in the scientific community. The oldest of the Mg-suite rocks have crystallization ages of about 3.85 Ga. However, the last large impact that could have excavated deep into the crust (the Imbrium basin) also occurred at 3.85 Ga before present. Thus, it seems probable that Mg-suite plutonic activity continued for a much longer time, and that younger plutonic rocks exist deep below the surface.


Analysis of the lunar samples seems to imply that a significant percentage of the lunar impact basins formed within a very short period of time between about 4 and 3.85 Ga ago. This hypothesis is referred to as the lunar cataclysm or late heavy bombardment. However, it is now recognized that ejecta from the Imbrium impact basin (one of the youngest large impact basins on the Moon) should be found at all of the Apollo landing sites. It is thus possible that ages for some impact basins (in particular Mare Nectaris) could have been mistakenly assigned the same age as Imbrium.
The lunar maria represent ancient flood basaltic eruptions. In comparison to terrestrial lavas, these contain higher iron abundances, have low viscosities, and some contain highly elevated abundances of the titanium-rich mineral ilmenite. The majority of basaltic eruptions occurred between about 3 and 3.5 Ga ago, though some mare samples have ages as old as 4.2 Ga, and the youngest (based on the method of crater counting) are believed to have erupted only 1 billion years ago. Along with mare volcanism came pyroclastic eruptions, which launched molten basaltic materials hundreds of kilometres away from the volcano. A large portion of the mare formed, or flowed into, the low elevations associated with the nearside impact basins. However, Oceanus Procellarum does not correspond to any known impact structure, and the lowest elevations of the Moon within the farside South Pole-Aitken basin are only modestly covered by mare (see lunar mare for a more detailed discussion).

The first rocks brought back by Apollo 11 were basalts. Although the mission landed on Mare Tranquillitatis, a few millimetric fragments of rocks coming from the highlands were picked up. These are composed mainly of plagioclase feldspar; some fragments were composed exclusively of anorthositic plagioclase. The identification of these mineral fragments led to the bold hypothesis that a large portion of the Moon was once molten, and that the crust formed by fractional crystallization of this magma ocean. 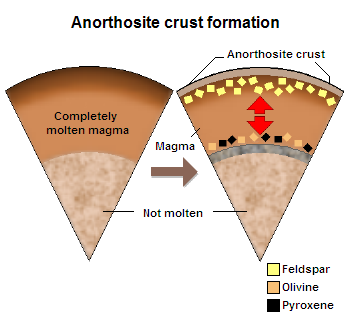 A natural outcome of the giant impact event is that the materials that reaccreted to form the Moon must have been hot. Current models predict that a large portion of the Moon would have been molten shortly after the Moon formed, with estimates for the depth of this magma ocean ranging from about 500 km to complete melting. Crystallization of this magma ocean would have given rise to a differentiated body with a compositionally distinct crust and mantle and accounts for the major suites of lunar rocks.
As crystallization of the lunar magma ocean proceeded, minerals such as olivine and pyroxene would have precipitated and sank to form the lunar mantle. After crystallization was about three-quarters complete, anorthositic plagioclase would have begun to crystallize, and because of its low density, float, forming an anorthositic crust. Importantly, elements that are incompatible (i.e., those that partition preferentially into the liquid phase) would have been progressively concentrated into the magma as crystallization progressed, forming a KREEP-rich magma that initially should have been sandwiched between the crust and mantle. Evidence for this scenario comes from the highly anorthositic composition of the lunar highland crust, as well as the existence of KREEP-rich materials.

The Apollo program brought back 381.7 kg (841.5 lb) of lunar surface material, most of which is stored at the Lunar Receiving Laboratory in Houston, Texas, and the unmanned Soviet Luna programme returned 0.3 kilograms of lunar material. These rocks have proved to be invaluable in deciphering the geologic evolution of the Moon. Lunar rocks are in large part made of the same common rock forming minerals as found on Earth, such as olivine, pyroxene, and plagioclase feldspar (anorthosite). Plagioclase feldspar is mostly found in the lunar crust, whereas pyroxene and olivine are typically seen in the lunar mantle. The mineral ilmenite is highly abundant in some mare basalts, and a new mineral named armalcolite (named for Armstrong, Aldrin, and Collins, the three members of the Apollo 11 crew) was first discovered in the lunar samples. The maria are composed predominantly of basalt, whereas the highland regions are iron-poor and composed primarily of anorthosite, a rock composed primarily of calcium-rich plagioclase feldspar. Another significant component of the crust are the igneous Mg-suite rocks, such as the troctolites, norites, and KREEP-basalts. These rocks are believed to be genetically related to the petrogenesis of KREEP. Composite rocks on the lunar surface often appear in the form of breccias. Of these, the subcategories are called fragmental, granulitic, and impact-melt breccias, depending on how they were formed. The mafic impact melt breccias, which are typified by the low-K Fra Mauro composition, have a higher proportion of iron and magnesium than typical upper crust anorthositic rocks, as well as higher abundances of KREEP.

The above story is based on materials provided by Wikipedia . Materials may be edited for content and length.