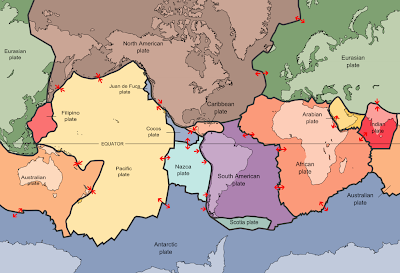 Two studies show that the movement rate of plates carrying Earth's crust may not be constant over time. This could provide a new explanation for the patterns observed in the speed of evolution and has implications for the interpretation of climate models. The work is presented today at Goldschmidt 2014, the premier geochemistry conference taking place in Sacramento, California, USA.
Earth's continental crust can be thought of as an archive of Earth's history, containing information on rock formation, the atmosphere and the fossil record. However, it is not clear when and how regularly crust formed since the beginning of Earth history, 4.5 billion years ago.

Researchers led by Professor Peter Cawood, from the University of St. Andrews, UK, examined several measures of continental movement and geologic processes from a number of previous studies. They found that, from 1.7 to 0.75 billion years ago (termed Earth's middle age), Earth appears to have been very stable in terms of its environment, with little in the way of crust building activity, no major fluctuations in atmospheric composition and few major developments seen in the fossil record. This contrasts markedly with the time periods either side of this, which contained major ice ages and changes in oxygen levels. Earth's middle age also coincides with the formation of a supercontinent called Rodinia, which appears to have been stable throughout this time.

Professor Cawood suggests this stability may have been due to the gradual cooling of Earth's crust over time. "Before 1.7 billion years ago, the Earth's crust would have been substantially hotter, meaning that continental plate movement may have been governed by different rules to those that operate today," said Professor Cawood. "0.75 billion years ago, the crust reached a point where it had cooled sufficiently to allow modern day plate tectonics to start working, in particular allowing subduction zones to form (where one plate of the crust moves under another). This increase in activity could have kick-started a myriad of changes including the break-up of Rodinia and changes to levels of key elements in the atmosphere and seas, which in turn may have induced evolutionary changes in the life forms present."

This view is backed up by work from Professor Kent Condie from New Mexico Tech, USA, which suggests the movement rate of Earth's crust is not constant but may be speeding up over time. Professor Condie examined how supercontinents assemble and break up. "Our results challenge the view that the rate of plate movement is stable over time," said Professor Condie. "The interpretation of data from many other disciplines such as stable isotope geochemistry, palaeontology and paleoclimatology in part rely on the assumption that the movement rate of the Earth's crust is constant."

Results from these fields may now need to be re-examined in light of Condie's findings. "We now urgently need to collect further data on critical time periods to understand more about the constraints on plate speeds and the frequency of collision between continental blocks," concluded Professor Condie.

The above story is based on materials provided by European Association of Geochemistry.
Share to: