How do waterfalls form? 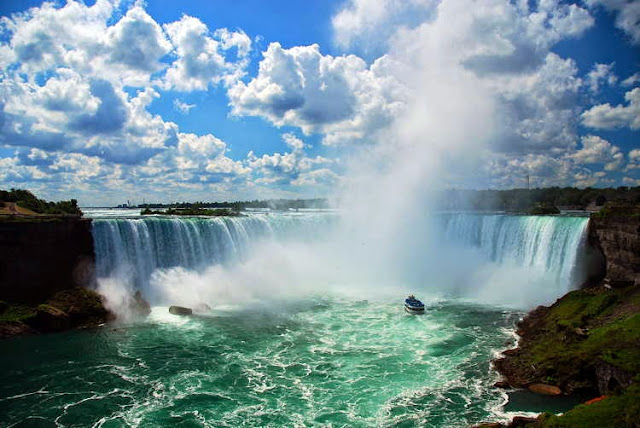 Waterfalls are spectacular displays of the beauty and power of nature. The highest waterfall in the world is Angel Falls in Venezuela at a height of over 3000 feet. We will explore how waterfalls are formed and the processes behind such formations.


The Magnificence of Waterfalls

Waterfalls form in rivers that are young. This is due to the channel being deep and narrow to allow for the formation of the waterfall. Generally, waterfalls form in the upper course of a river. This is where a layer of hard rock lies next to a layer of soft rock. The bedrock, as these layers are collectively known, of a river is the loose sand, soil and silt that sits underneath the river and moves quickly along with the river at steep inclines. 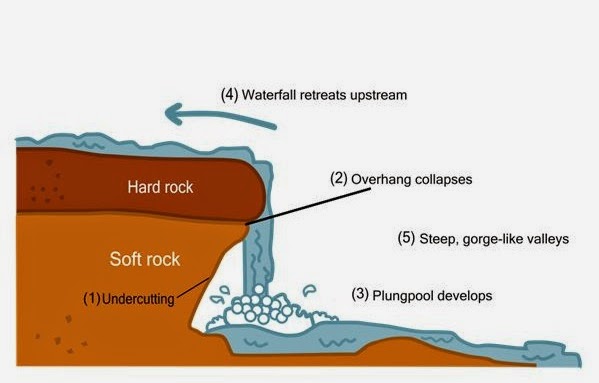 Through a process known as abrasion, which is the erosion of rock surfaces due to friction between the rocks and moving particles carried by the river, a drop starts to develop. The vertical drop forms gradually as more and more of the soft rock gets eroded and carried downstream. Hydraulic action along with abrasion constantly keeps working to erode the softer rock and eventually a plunge pool is formed beneath the river. Gradually, the hard rock also starts getting eroded and carried downstream, which increases the size of the plunge pool.
Eventually, the river flow becomes steep enough and forms the familiar formation of a waterfall. The hard rock also breaks loose after gradual erosion and falls into the plunge pool. Here, it gets swirled around until a steep sided valley known as a gorge is formed. 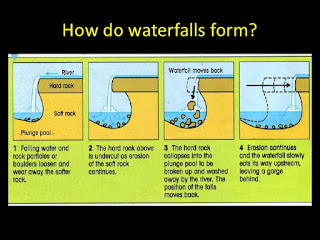 As waterfalls continue to flow over long periods, they begin to retreat. This results in a horizontal pit which is parallel to the waterfall. Over a period of many years, the pit becomes larger and the waterfall is replaced by a stretch of river bed, which is inclined. Movements of the Earth's crust, such as earthquakes and volcanoes, can cause a change in the land area, which also results in the formation of waterfalls.
A third way in which waterfalls can form is by the movement of glaciers. Glaciers move down valleys eroding them and making them much bigger. As a result, smaller valleys flowing into the glacier valley are left behind emptying the water that they were flowing into the air creating a waterfall.
There are many different types of waterfalls and we will look at some of them briefly and how they are formed.