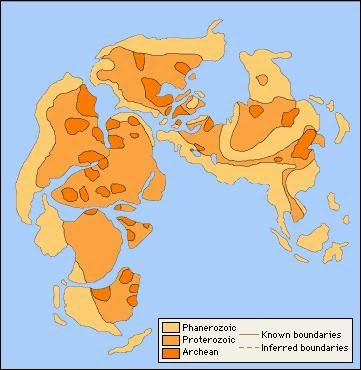 The Archaean = the oldest period of Earth’s history for which we’ve got direct geological evidences. It extends from the oldest known rocks (today: 4.04 Ga Acasta gneisses in the Slave Province, Canada, plus older zircons crystals in younger sediments, 4.4 Ga), to the Grat Dyke of (ca. 2.5 Ga). It therefore represents 1/3 to 1/2 of Earth’s history.

The oldest Archaean terranes
-          The Acasta gneisses in the Slave province are just big enclaves in much younger rocks;
-          The oldest coherent Archaean block: SW Greenland (Isua Greenstone belt, Amitsoq gneisses)
-          Pilbara (NW Australia) and Kaapvaal () cratons formed between 3.5 and 3.2 Ga, they are probably the next oldest blocks.

Present in many small blocks in all continents, both as Archaean terranes, or as reworked/covered provinces.

Most of the continental crust (up to 75 % ?) formed during the Archaean.

E.    Why was the Archaean different?

Effects of higher heat production? Two end-members:
-          “uniform” increase of the heat fluxes: all parts of the Earth are hotter. This can result in hotter intra-plate situations, and maybe blur the difference between within plate and plate boundaries situations. This would correspond to a “non-plate tectonics” model. Supported by geological evidences such as “dome and basin” structures (, Pilbara)/
-          “heterogen” increase, with more hot zones (ridges) and less cold zones, maybe resulting in more numerous, smaller plates (but still plate tectonics operating).

Anyway, there is no consensus on the nature of Archaean tectonics – so, studying Archaean igneous rocks is more complicated because it is not possible to make assumptions on the context of formation of the rocks. More careful studies, cautiously moving from observations to interpretations, are needed: a good case study to test our understanding of petrogenetic processes.

They are a class of ultramafic, magnesian lavas first described in Barberton Greenstone Belt in 1969 (along the ).

A.   Structure of komatiite flows

From top to bottom, komatiites are made of

B.   Origin of komatiite lavas

Komatiites and the Archaean mantle

The main component of the grey gneisses is made of calc-alkaline granitoids (≈ I-types), with some differences from modern I-type plutons:
-          They are rich in Na, and consequently in sodic plagioclage (albite) (whereas modern I-types are rich in K and K-Spar). They therefore are made of tonalites, trondhjemites (leuco-tonalites, quartz bearing) and granodiorites – therefore the name TTG.
-          They have characteristic trace elements signatures, marked with relatively low Y or HREE contents (elements with strong affinity for garnet), and corresponding high La/Yb or Sr/Y. La/Yb vs. Yb or Sr/Y vs. Y diagrams clearly show the difference.

B.   Origin of TTG magmas

Sodic, intermediate magmas must be formed from a plagioclase-rich source; experimental studies show that the most likely source is amphibolite (metamorphosed basalt).

Melting is produced by dehydration-melting of amphibole: Amp + Pg = Melt + Grt/Opx;  quite similar to the reactions that form granites (Bt+Pg = M + Crd/Grt).

Low Y and Yb imply that Garnet was present in the residuum, so pressures must have been above 10-12 kbar.

D.   Some lines of research and debate

Are TTGs and adakites similar? Some think yes, some think no.

It seems that TTGs younger than 3.0 Ga are rather similar to adakites, but older TTGs are more different – the main difference is Mg, Ni, Cr contents.

2.      Interactions between TTGs and mantle wedge

TTGs are typically Mg, Ni and Cr richer than experimental melts, suggesting some sort of “secondary” enrichement. This could be due to interaction between TTG liquids and ultramafic mantle wedge during magma ascent, and this implies a geometry with the basaltic source located below peridotites. Can this be achieved in a situation other than a subducted slab?

Increasing Mg Ni Cr contents in TTGs from 3.5 to 2.5 Ga suggest that the magnitude of these interactions increase from 3.5 to 2.5 This is consistent with progressive cooling of the Earth and progressively deeper melting, until the Earth becomes to cold to allow melting (at the end of the Archaean), except in some specific situations (adakites).