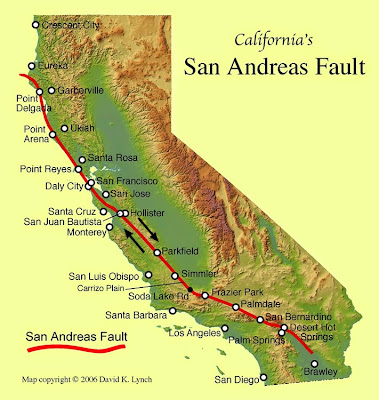 UC Berkeley seismologists were surprised last August to see a dramatic increase in faint tremors occurring under the San Andreas Fault near Parkfield, in Central California, about 10 hours after a magnitude 6.0 earthquake struck Napa. Somehow, that quake triggered tiny rumblings 250 miles away that lasted for about 100 days before dropping off.

These same researchers have recently found two other places in California where tremors are happening below the zone where earthquakes normally occur, and have now embarked on a comprehensive search for tremors throughout the state.

Key to discovering the connection between tremors and earthquakes is TremorScope, a set of four seismic stations to be placed about 900 feet underground near Parkfield to listen for these faint whispers. They will be added to four new surface stations already deployed as a part of the project.
“It’s a big job, but we hope to develop a near-real-time tremor monitoring capability in the TremorScope area and elsewhere,” said UC Berkeley seismologist Robert Nadeau, who will be working on the project with help from the Berkeley Institute for Data Science.
TremorScope is funded by a $1.2 million grant from the Gordon and Betty Moore Foundation.
“Tremors are associated with big, very slow movements on the fault, and there is speculation that they might cause big earthquakes,” said research seismologist Peggy Hellweg, UC Berkeley project lead for TremorScope and operations manager at the Berkeley Seismological Laboratory. “But we see tremor activity with earthquakes and earthquakes without tremor, so the connection is still unclear.”
Tremors originate beneath the zone where earthquakes occur and appear to be associated with slipping rocks deep in the earth. UC Berkeley seismologists discovered tremors just south of the Parkfield area of the San Andreas Fault in 2004, and subsequent studies suggest that changes in tremor activity may precede earthquakes. Tremors also have been detected in active earthquake zones in Japan, Washington state and other subduction zones around the world.
TremorScope is designed to measure these tremors more precisely than ever before, using geophones sensitive to high-frequency ground movement and broadband seismometers able to record low-frequency rumblings. Geophones and broadband seismometers are to be installed in four deep boreholes drilled around an area of the San Andreas Fault near Parkfield that seems to be the center of tremor activity where the northern and southern segments of the fault meet. The borehole instruments, which can detect quieter tremors because of less noise underground, complement instruments already in place at four surface stations in the area.
A surface accelerometer was installed in January at a site on the property of Cass Vineyard and Winery, located 12 miles east of Highway 101 near Paso Robles. The borehole instruments will be installed at the winery site May 6 and 7, with installation of the three other borehole seismometers scheduled in the coming months.
“With the four surface seismometers now installed, TremorScope is already helping us to locate tremor,” Nadeau said. “The deeper borehole seismometers will be able to give us a range of frequencies at higher resolution to figure out what is going on underground.”


Note : The above story is based on materials provided by University of California - Berkeley.
Share to: