First sensor of Earth's magnetic field in an animal 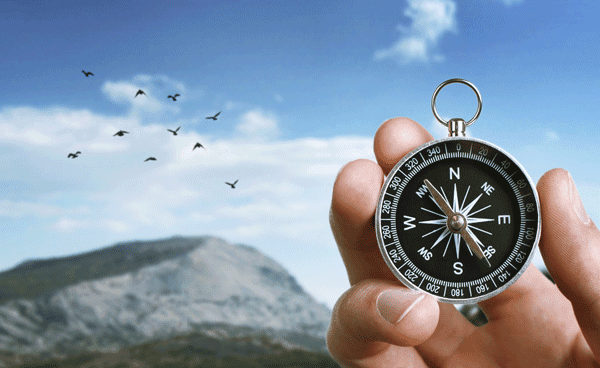 A team of scientists and engineers at The University of Texas at Austin has identified the first sensor of Earth's magnetic field in an animal, finding in the brain of a tiny worm a big clue to a long-held mystery about how animals' internal compasses work.

Animals as diverse as migrating geese, sea turtles and wolves are known to navigate using Earth's magnetic field. But until now, no one has pinpointed quite how they do it. The sensor, found in worms called C. elegans, is a microscopic structure at the end of a neuron that other animals probably share, given similarities in brain structure across species. The sensor looks like a nano-scale TV antenna, and the worms use it to navigate underground.
"Chances are that the same molecules will be used by cuter animals like butterflies and birds," said Jon Pierce-Shimomura, assistant professor of neuroscience in the College of Natural Sciences and member of the research team. "This gives us a first foothold in understanding magnetosensation in other animals."
The researchers discovered that hungry worms in gelatin-filled tubes tend to move down, a strategy they might use when searching for food.
When the researchers brought worms into the lab from other parts of the world, the worms didn't all move down. Depending on where they were from -- Hawaii, England or Australia, for example -- they moved at a precise angle to the magnetic field that would have corresponded to down if they had been back home. For instance, Australian worms moved upward in tubes. The magnetic field's orientation varies from spot to spot on Earth, and each worm's magnetic field sensor system is finely tuned to its local environment, allowing it to tell up from down.
The research is published today in the journal eLife.
The study's lead author is Andrés Vidal-Gadea, a former postdoctoral researcher in the College of Natural Sciences at UT Austin, now a faculty member at Illinois State University. He noted that C. elegans is just one of myriad species living in the soil, many of which are known to migrate vertically.
"I'm fascinated by the prospect that magnetic detection could be widespread across soil dwelling organisms," said Vidal-Gadea.
The neuroscientists and engineers, who use C. elegans in their research into Alzheimer's disease and addiction, had previously discovered the worm's ability to sense humidity. That work led them to ask what else the worms might be able to sense, such as magnetic fields.
In 2012, scientists from Baylor College of Medicine announced the discovery of brain cells in pigeons that process information about magnetic fields, but they did not discover which part of the body senses the fields. That team and others have proposed a magnetosensor in the birds' inner ear.
"It's been a competitive race to find the first magnetosensory neuron," said Pierce-Shimomura. "And we think we've won with worms, which is a big surprise because no one suspected that worms could sense the Earth's magnetic field."
The neuron sporting a magnetic field sensor, called an AFD neuron, was already known to sense carbon dioxide levels and temperature.
The researchers discovered the worms' magnetosensory abilities by altering the magnetic field around them with a special magnetic coil system and then observing changes in behavior. They also showed that worms which were genetically engineered to have a broken AFD neuron did not orient themselves up and down as do normal worms. Finally, the researchers used a technique called calcium imaging to demonstrate that changes in the magnetic field cause the AFD neuron to activate.
Pierce-Shimomura suggested this research might open up the possibility of manipulating magnetic fields to protect agricultural crops from harmful pests.Other members of the research team from the College of Natural Sciences are Joshua Russell, a former graduate student who completed his Ph.D.; Kristi Ward, a former undergraduate; and Celia Beron, a current undergraduate. Research team members from the Cockrell School of Engineering are: Dr. Adela Ben-Yakar, associate professor of mechanical engineering; Navid Ghorashian, a former graduate student who completed his Ph.D.; and Sertan Gokce, a current graduate student.
Support for this research came from the National Institutes of Health and the National Institute of Neurological Disorders and Stroke.