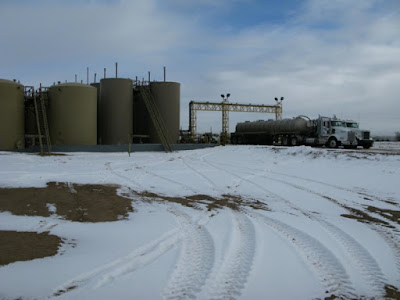 A dramatic increase in the rate of earthquakes in the central and eastern U.S. since 2009 is associated with fluid injection wells used in oil and gas development, says a new study by the University of Colorado Boulder and the U.S. Geological Survey.

The number of earthquakes associated with injection wells has skyrocketed from a handful per year in the 1970s to more than 650 in 2014, according to CU-Boulder doctoral student Matthew Weingarten, who led the study. The increase included several damaging quakes in 2011 and 2012 ranging between magnitudes 4.7 and 5.6 in Prague, Oklahoma; Trinidad, Colorado; Timpson, Texas; and Guy, Arkansas.

"This is the first study to look at correlations between injection wells and earthquakes on a broad, nearly national scale," said Weingarten of CU-Boulder's geological sciences department. "We saw an enormous increase in earthquakes associated with these high-rate injection wells, especially since 2009, and we think the evidence is convincing that the earthquakes we are seeing near injection sites are induced by oil and gas activity."

A paper on the subject appears in the June 18 issue of Science.

The researchers found that "high-rate" injection wells—those pumping more than 300,000 barrels of wastewater a month into the ground—were much more likely to be associated with earthquakes than lower-rate injection wells. Injections are conducted either for enhanced oil recovery, which involves the pumping of fluid into depleted oil reservoirs to increase oil production, or for the disposal of salty fluids produced by oil and gas activity, said Weingarten.

Co-authors on the study include CU-Boulder Professor Shemin Ge of the geological sciences department and Jonathan Godt, Barbara Bekins and Justin Rubinstein of the U.S. Geological Survey (USGS). Godt is based in Denver and Bekins and Rubenstein are based in Menlo Park, California.

The team assembled a database of roughly 180,000 injection wells in the study area, which ranged from Colorado to the East Coast. More than 18,000 wells were associated with earthquakes—primarily in Oklahoma and Texas—and 77 percent of associated injection wells remain active, according to the study authors.


Enhanced oil recovery wells differ from hydraulic fracturing, or fracking wells, in that they usually inject for years or decades and are operated in tandem with conventional oil production wells, said Weingarten. In contrast, fracking wells typically inject for just hours or days.

The team noted that thousands of injection wells have operated during the last few decades in the central and eastern U.S. without a ramp-up in seismic events. "It's really the wells that have been operating for a relatively short period of time and injecting fluids at high rates that are strongly associated with earthquakes," said Weingarten.

In addition to looking at injection rates of individual wells over the study area, the team also looked at other aspects of well operations including a well's cumulative injected volume of fluid over time, the monthly injection pressure at individual wellheads, the injection depth, and their proximity to "basement rock" where earthquake faults may lie. None showed significant statistical correlation to seismic activity at a national level, according to the study.

Oklahoma had the most seismic activity of any state associated with wastewater injection wells. But parts of Colorado, west Texas, central Arkansas and southern Illinois also showed concentrations of earthquakes associated with such wells, said Weingarten.

In Colorado, the areas most affected by earthquakes associated with injection wells were the Raton Basin in the southern part of the state and near Greeley north of Denver.

"People can't control the geology of a region or the scale of seismic stress," Weingarten said. "But managing rates of fluid injection may help decrease the likelihood of induced earthquakes in the future."

Provided by University of Colorado at Boulder
Share to: