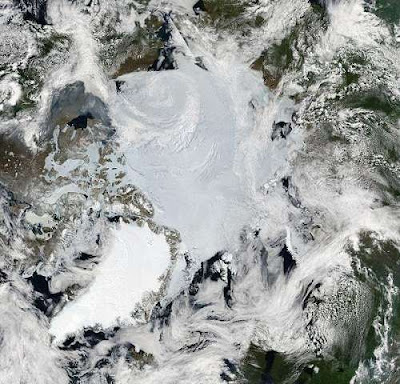 New analysis of the effects of melting permafrost in the Arctic points to $43 trillion in extra economic damage by the end of the next century, on top of the more than the $300 trillion economic damage already predicted.

Increased greenhouse gas emissions from the release of carbon dioxide and methane contained in the Arctic permafrost could result in $43 trillion in additional economic damage by the end of the next century, according to researchers from the University of Cambridge and the University of Colorado.
In a letter published today (21 September) in the journal Nature Climate Change, the researchers have for the first time modelled the economic impact caused by melting permafrost in the Arctic to the end of the twenty-second century, on top of the damage already predicted by climate and economic models.
The Arctic is warming at a rate which is twice the global average, due to anthropogenic, or human-caused, greenhouse gas emissions. If emissions continue to rise at their current rates, Arctic warming will lead to the widespread thawing of permafrost and the release of hundreds of billions of tonnes of methane and CO2 -- about 1,700 gigatonnes of carbon are held in permafrost soils in the form of frozen organic matter.
Rising emissions will result in both economic and non-economic impacts, as well as a higher chance of catastrophic events, such as the melting of the Greenland and West Antarctic ice sheets, increased flooding and extreme weather. Economic impacts directly affect a country's gross domestic product (GDP), such as the loss of agricultural output and the additional cost of air conditioning, while non-economic impacts include effects on human health and ecosystems.
The researchers' models predict $43 trillion in economic damage could be caused by the release of these greenhouse gases, an amount equivalent to more than half the current annual output of the global economy. This brings the total predicted impact of climate change by 2200 to $369 trillion, up from $326 trillion -- an increase of 13 percent.
"These results show just how much we need urgent action to slow the melting of the permafrost in order to minimise the scale of the release of greenhouse gases," said co-author Dr Chris Hope from the Cambridge Judge Business School.
Hope's calculations were conducted in collaboration with Kevin Schaefer of the National Snow and Ice Data Center at the University of Colorado.
Hope and Schaefer used the PAGE09 (Policy Analysis of the Greenhouse Effect) integrated assessment model to measure the economic impact of permafrost thawing on top of previous calculations of the climate change costs of business-as-usual greenhouse gas emissions from the Intergovernmental Panel on Climate Change (IPCC).
"We want to use these models to help us make better decisions -- linking scientific and economic models together is a way to help us do that," said Hope. "We need to estimate how much it will cost if we do nothing, how much it will cost if we do something, and how much we need to spend to cut back greenhouse gases."
The researchers say that if an aggressive strategy to reduce emissions from thawing permafrost is adopted, it could reduce the impact by as much as $37 trillion.

The above post is reprinted from materials provided by University of Cambridge. The original story is licensed under a Creative Commons Licence. Note: Materials may be edited for content and length.