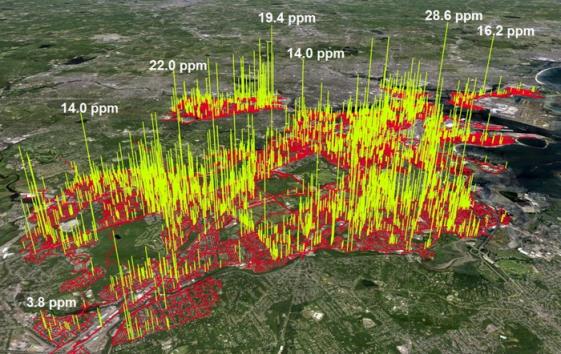 After analyzing the seismic waves produced by small underground chemical explosions at a test site in Vermont, scientists say that some features of seismic waves could be affected by the amount of gas produced in the explosion.


This unexpected finding may have implications for how scientists use these types of chemical explosions to indirectly study the seismic signal of nuclear detonations. Researchers use chemical blasts to learn more about the specific seismic signatures produced by explosions--which differ from those produced by earthquakes--to help efforts to detect and trace nuclear test explosions under entities such as the Comprehensive Nuclear-Test-Ban Treaty.

Chemical explosions are only a proxy for nuclear explosions, however, and it is difficult to say how or if the results of the new study may apply to seismic monitoring of nuclear explosions, cautioned study author Anastasia Stroujkova of Weston Geophysical Corp.
In the study published online in the Bulletin of the Seismological Society of America, Stroujkova reports that characteristics of P waves produced by chemical explosions depend on the amount of gas by-products released in the rock cavity that is created by the blasts. P waves are the fast-moving seismic waves that push and pull through rock in the direction of the wave's propagation, and are the first part of a seismic signature to reach a seismic monitoring station.

In particular, the lingering, non-condensable gas produced in the explosions seemed to affect the size of low frequency portion of P waves, which could be important for seismic monitoring, said Stroujkova. High frequency seismic waves weaken faster than low frequency waves, sometimes becoming lost among the background noise of other seismic signals before they can reach monitoring stations a thousand or more kilometers away, "while the low frequencies can be detected and analyzed further away from the sources," she explained.

In nuclear explosions, the low frequency amplitude is also proportional to the yield, or amount of energy discharged by a detonation, Stroujkova noted, making it "an important observable characteristic of seismic waves."

The amount of gas produced in the chemical explosions could affect the low frequency P waves in two possible ways, Stroujkova suggested. The expanding gas could contribute to an increase in the volume of the rock cavity produced by the explosion, or the gas may be fracturing the surrounding rock for a long time after the initial explosion. "More research is needed to better understand and clarify these possible effects," she said.
The explosions studied by Stroujkova are part of the New England Damage Experiment (NEDE) in Vermont, conducted by Weston Geophysical Corp. in collaboration with New England Research, Inc. The main goal of the NEDE is to study seismic waves generated by explosives that differ in detonation power. In particular, the project has focused on the slower, shear or S waves, in which oscillations take place in the plane perpendicular to P waves.

The small explosions studied by Stroujkova were fueled by either an ammonium nitrate and fuel oil combination or Composition B, an explosive mix often used in artillery projectiles and land mines. The explosives were detonated in boreholes in the granite bedrock at depths ranging from about 11 to 13 meters (36 to 46 feet) deep. The explosions were performed by a team of professional blasters within a rock quarry. The explosions, designed to be fully contained underground, are smaller than the majority of the blasts used in quarry mining.