Causes of Afghanistan and Pakistan Earthquake 2015 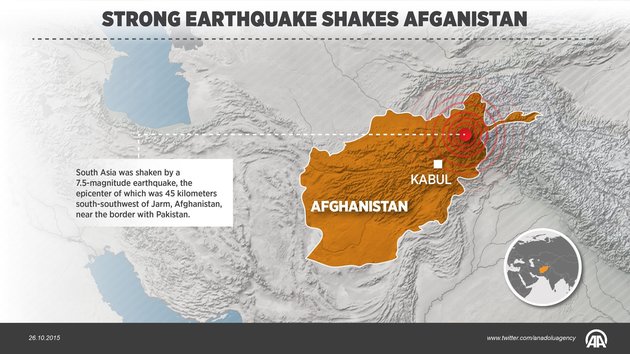 On 26 October 2015, at 14:45 (09:09 UTC), a magnitude 7.5 earthquake struck South Asia,
with the epicenter 45 km north of `Alaqahdari-ye Kiran wa Munjan, Afghanistan in the Hindu Kush region. Tremors were felt in Afghanistan, Pakistan, India, Tajikistan, and Kyrgyzstan.The earthquake was felt in Indian cities of New Delhi, Srinagar and in the prefectures of Kashgar, Aksu, Hotan, and Kizilsu in Xinjiang, China.

The earthquake, Pakistan's biggest ever, occurred at a depth of 210km.

The mountainous region is a seismically active area, with earthquakes the result of the Indian subcontinent driving into and under the Eurasian landmass.

Such tectonic shifts can cause enormous and destructive releases of energy.


The Hindu Kush mountain range lies near the boundary of the Eurasian and Indo-Australian tectonic plates, where the greatest continental collision on Earth is currently taking place.

There are on average four earthquakes a year measuring five or more on the Richter scale, with the epicentres occurring within 60 kilometres (37 miles) of the Hindu Kush.

"The Indian continent is moving north, and it is colliding with the Eurasian continent, and that results in the subsequent uplift of the Himalayan mountains and the Tibetan plateau," Dr Brian Baptie of the British Geological Survey Said.

"It's this collision that is the cause of all the seismic activity that is going on in this area."

The surface of the Earth is divided into seven major moving tectonic plates.

Until about 100 million years ago, the Indo-Australian and Eurasian plates were partly separated by the so-called Tethys Sea.

They first collided about 60 million years ago.

The collision is a slow-motion one - the two plates are converging on each other at a rate of about 4.4 centimetres (2 inches) a year - but the energies are colossal.

As a result, the Himalayas are still rising. Satellite measurements put their ascent at about five millimetres per year.

Hindu Kush lies in the area of collision of the Eurasian and Indian tectonic plates. The geological activity born out of this collision, also responsible for the birth of the Himalayan mountain range, is the cause of unstable seismicity in the region.

The earthquake occurred  at a depth of approximately 210 km, with its epicentre approximately 82km southeast of Feyzabad, Afghanistan. The United States Geological Survey (USGS) initially measured the quake's intensity at 7.7 then revised it down to 7.6 and later to 7.5. The Pakistan Meteorological Department, however, said the magnitude of the earthquake was 8.1. According to USGS, the epicentre is 67km from Chitral.