The East African Rift System (EARS) is one the geologic wonders of the world, a place where the earth's tectonic forces are presently trying to create new plates by splitting apart old ones. In simple terms, a rift can be thought of as a fracture in the earth's surface that widens over time, or more technically, as an elongate basin bounded by opposed steeply dipping normal faults.

Geologists are still debating exactly how rifting comes about, but the process is so well displayed in East Africa (Ethiopia-Kenya-Uganda-Tanzania) that geologists have attached a name to the new plate-to-be; the Nubian Plate makes up most of Africa, while the smaller plate that is pulling away has been named the Somalian Plate (Figure 1).

These two plates are moving away form each other and also away from the Arabian plate to the north. The point where these three plates meet in the Afar region of Ethiopia forms what is called a triple-junction. However, all the rifting in East Africa is not confined to the Horn of Africa; there is a lot of rifting activity further south as well, extending into Kenya and Tanzania and Great Lakes region of Africa. The purpose of this paper is to discuss the general geology of these rifts are and highlight the geologic processes involved in their formation. 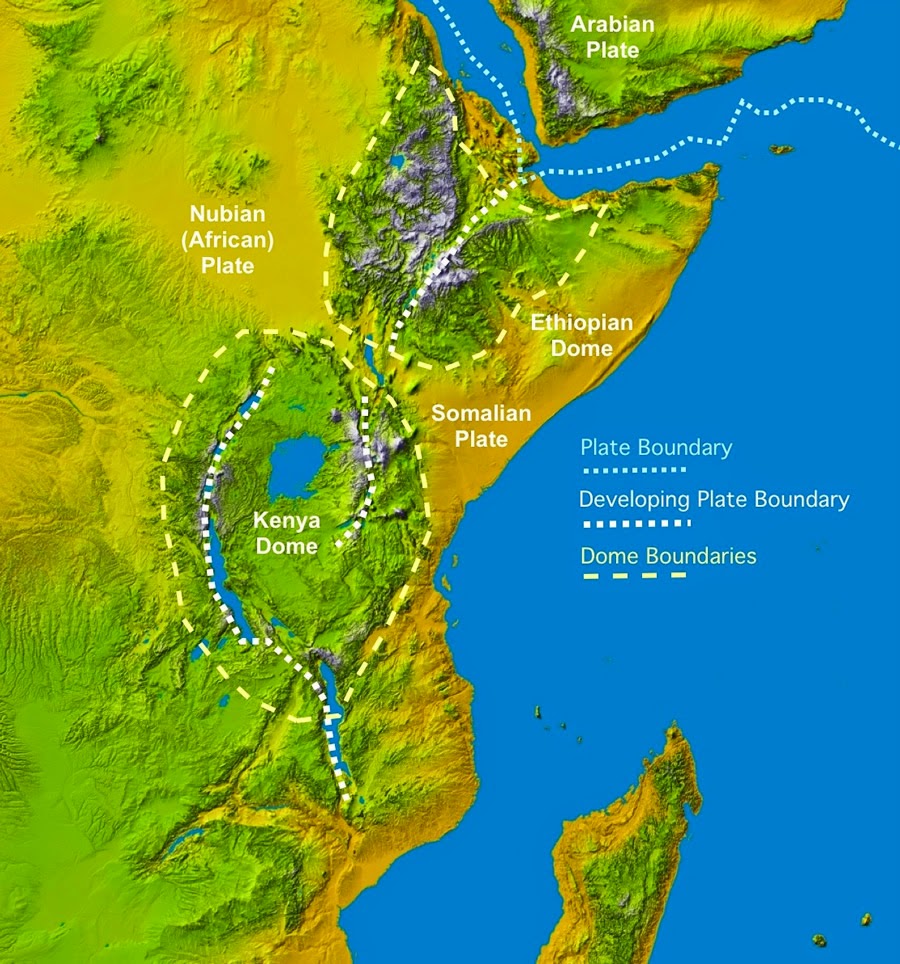 What is the East Africa Rift System?

The oldest and best defined rift occurs in the Afar region of Ethiopia and this rift is usually referred to as the Ethiopian Rift. Further to the South a series of rifts occur which include a Western branch, the "Lake Albert Rift" or "Albertine Rift" which contains the East African Great Lakes, and an Eastern branch that roughly bisects Kenya north-to-south on a line slightly west of Nairobi .

These two branches together have been termed the East African Rift (EAR), while parts of the Eastern branch have been variously termed the Kenya Rift or the Gregory Rift (after the geologist who first mapped it in the early 1900's). The two EAR branches are often grouped with the Ethiopian Rift to form the East Africa Rift System (EARS).

The complete rift system therefore extends 1000's of kilometers in Africa alone and several 1000 more if we include the Red Sea and Gulf of Aden as extensions. In addition there are several well-defined but definitely smaller structures, called grabens, that have rift-like character and are clearly associated geologically with the major rifts. Some of these have been given names reflecting this such as the Nyanza Rift in Western Kenya near Lake Victoria. Thus, what people might assume to be a single rift somewhere in East Africa is really a series of distinct rift basins which are all related and produce the distinctive geology and topography of East Africa.

How did these Rifts form?


The exact mechanism of rift formation is an on-going debate among geologists and geophysicists. One popular model for the EARS assumes that elevated heat flow from the mantle (strictly the asthenosphere) is causing a pair of thermal "bulges" in central Kenya and the Afar region of north-central Ethiopia. These bulges can be easily seen as elevated highlands on any topographic map of the area (Figure 1).
As these bulges form, they stretch and fracture the outer brittle crust into a series of normal faults forming the classic horst and graben structure of rift valleys . Most current geological thinking holds that bulges are initiated by mantle plumes under the continent heating the overlying crust and causing it to expand and fracture.
Ideally the dominant fractures created occur in a pattern consisting of three fractures or fracture zones radiating from a point with an angular separation of 120 degrees. The point from which the three branches radiate is called a "triple junction" and is well illustrated in the Afar region of Ethiopia, where two branches are occupied by the Red Sea and Gulf of Aden, and the third rift branch runs to the south through Ethiopia. 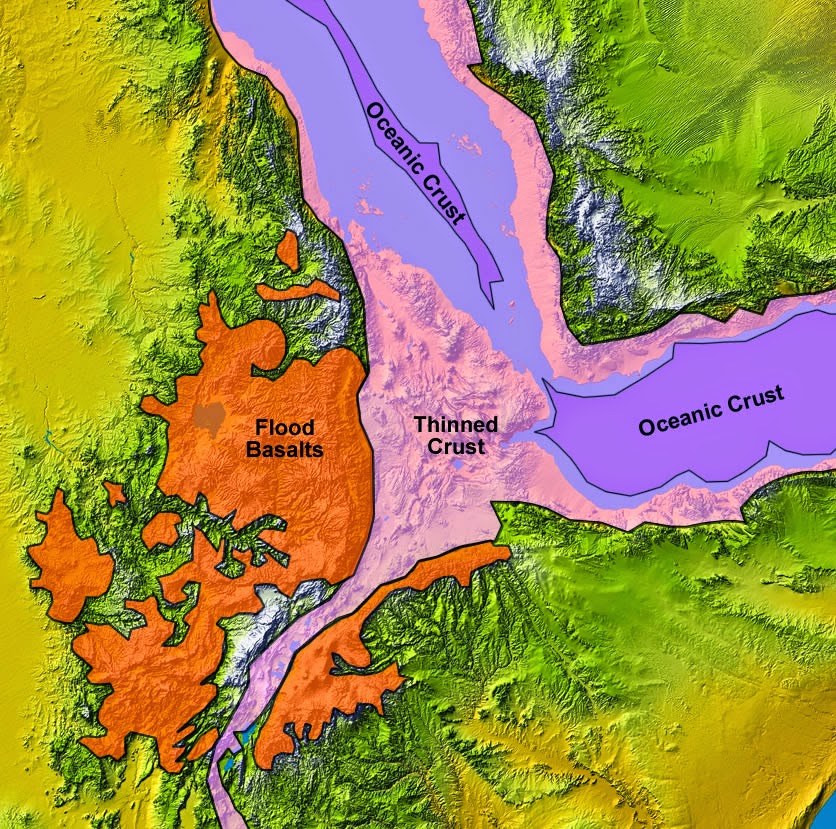 The stretching process associated with rift formation is often preceded by huge volcanic eruptions which flow over large areas and are usually preserved/exposed on the flanks of the rift. These eruptions are considered by some geologists to be "flood basalts" - the lava is erupted along fractures (rather than at individual volcanoes) and runs over the land in sheets like water during a flood.

Such eruptions can cover massive areas of land and develop enormous thicknesses (the Deccan Traps of India and the Siberian Traps are examples). If the stretching of the crust continues, it forms a "stretched zone" of thinned crust consisting of a mix of basaltic and continental rocks which eventually drops below sea level, as has happened in the Red Sea and Gulf of Aden. Further stretching leads to the formation of oceanic crust and the birth of a new ocean basin.