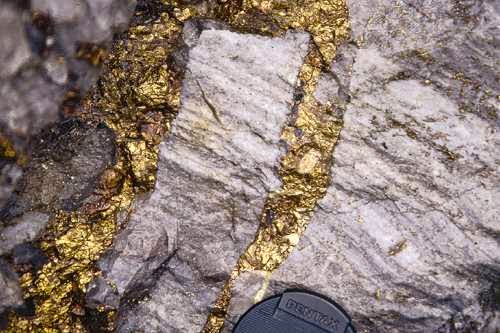 A new theory based on a simple but viable geologic model claims that over 80 percent of all commercial gold deposits were formed in a flash.


Gold seams are formed when mineral-rich waters flow through networks of cracks in rocks some 5-30 km deep. But the exact mechanism through which the gold is deposited is not really that well documented. According to this theory, local earthquakes brutally pull rocks apart, so fast that any fluids they contain are instantly vaporized, leaving behind the minerals they were carrying.

Richard Henley of the Australian National University in Canberra and Dion Weatherley of the University of Queensland in Brisbane have studied earthquake dynamics, and found that quake-triggered pressure changes are much larger than was previously believed; earthquake-triggered pressure are traditionally considered to be part of the process, but their impact was considered to be quite small. According to Henley however, earthquakes can open cracks in the deep rocks at the speed of sound.

As anybody who took a basic course in thermodynamics will tell you, the temperature at which water (or any fluid) boils is dependent on pressure. So when high pressures (remember, we’re a few km beneath the Earth’s surface) drop almost instantly under the influence of earthquakes, all the fluids are vaporized. As it evaporates, the minerals are deposited where they stood.

“Large quantities of gold may be deposited in only a few hundred thousand years,” says Weatherley – a brief interval by geological standards. “Each event drops a little more gold,” adds Henley. “You can see it microscopically, tiny layer after tiny layer. It just builds up.”
Share to: