In a quiet room behind several sets of bulletproof doors, N.B. Parag turned a 141-carat rough diamond in his hands. The golf-ball-size rock was too big for a ring finger, but just right for an investment portfolio.

“People that buy big stones are invested in their value,” said Mr. Parag, a director at Karp Group, an Indian diamond manufacturer and retailer. He says about half the large stones he sells end up in the vaults of wealthy customers who see diamonds as a long-term store of value.

Mr. Parag was in Botswana’s sleepy capital to bid on the latest batch of jumbo stones unearthed at an open-pit mine a few hundred miles to the north, at the edge of the Kalahari Desert. He marveled at the stone that sold days later for $6.1 million. “It’s like a work of art,” he said. He bid on it but fell short.

Dozens of diamond dealers are flocking to this remote African country to buy huge gems. Some of those stones are going into investment portfolios alongside stocks, bonds and gold, a trend that has accelerated as miners in southern Africa have started to put more big diamonds on the market in the past few years.

“It’s $10 million you can carry in your pocket without setting off an alarm, and it’s reasonably resalable. That’s unique,” said Brian Menell, an oil, gas and mining investor who has helped find big diamonds for wealthy clients and formerly worked for diamond-industry giant De Beers.

Stones of up to a few carats—each carat weighs 200 milligrams—have traditionally driven the diamond jewelry industry that has boomed in China and India. Mined in Africa, Canada and elsewhere, they are generally polished in Belgium, Israel or India and then set in rings, necklaces and other jewelry.

Like the price of gold, the value of those relatively common stones has declined since the height of the global financial crisis in 2011, when investors snapped up both minerals as a haven. 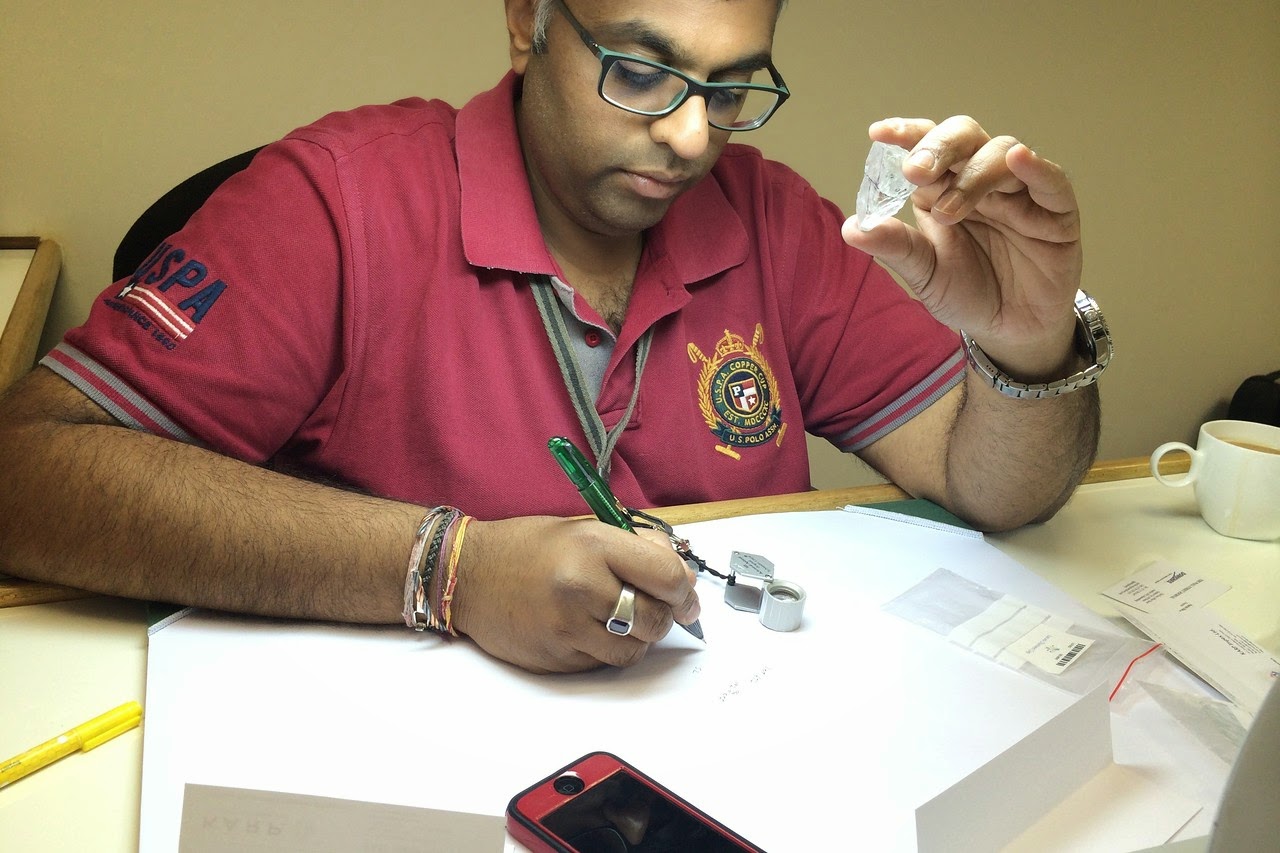 But over the past two decades, prices for larger stones have more than doubled. Prices for more accessible one-carat stones have risen 76%, according to the Rapaport Group, thanks to factors including De Beers’s tight control of many of the jewelry-grade stones that reach the market.

Martin Rapaport, founder of the firm whose price reports are the industry standard, believes diamonds will continue to appreciate as emerging-market consumers develop a taste for luxury. “If you want a long-term play on global economic expansion, diamonds are an increasingly accessible way to get it,” he said.

Zurich-based Finanz Konzept AG agrees. The firm launched a fund in 2012 that buys diamonds and stores them in Switzerland, Dubai and Hong Kong before reselling them to jewelers and other investors. Asset manager Necip Babuc says investments of at least $100,000 from wealthy individuals and $1 million from institutions should push the fund above $50 million next year.

Reflecting the recent dip in diamond prices, the fund is down almost 7% since 2012—better than many gold-focused funds that are down about 25% in that time.

As the fund grows, Mr. Babuc says he may add more “exceptional stones”—the industry term for gems of about 10 carats or more—to a portfolio that leans toward the smaller diamonds that drive the jewelry trade. Large diamonds can be hard to resell, he says, because of their high price tags.

But diamond traders say demand for big stones is on the rise from wealthy individuals drawn to the discreet exclusivity of a pocket-size asset with a seven-figure value. To fill orders for clients (which none was willing to name), they are turning to Botswana, where Vancouver-based Lucara Diamond Corp. and other miners are turning out large stones with increasing frequency.

“The top end of the market is evolving,” said William Lamb, Lucara’s chief executive. “Suddenly, there are more stones available.”

This year, Lucara made $136 million selling just 50 big diamonds, up from $72 million on 45 “exceptional stones” in 2013. London-based Petra Diamonds Ltd. in September sold a 123-carat blue diamond recovered from its flagship mine in South Africa for $27.6 million. Since it opened in 2006, Gem Diamonds Ltd.’s mine in Lesotho, a mountainous nation landlocked within South Africa, has produced four of the 20 largest white diamonds ever found.

Botswana is the world’s top diamond producer, but its stones were long spirited off by De Beers and other producers for sale in London and polishing in Antwerp, Tel Aviv and India.

At the government’s insistence, De Beers last year instructed its customers to pick up their diamonds in Gaborone instead. More than 20 polishing factories have opened here, and most of them specialize in larger diamonds that help make up for production costs that are higher than in India and other markets. They have created 4,000 jobs in a country with scant employment opportunities beyond government and the safari-tourism business.

“The cost of doing business in Botswana is just that: You have to do your business here,” said Jacob Thamage, the government’s lead liaison to the diamond industry.

The heart of this new industry is a high-security office park near Gaborone’s airport, where armored trucks weave between goats and cattle and young Botswanans sift piles of rough diamonds worth many millions of dollars.

There, Mr. Parag of the Karp Group was one of several diamond merchants who had flown in from Johannesburg to assess 14 stones. They ranged from 32 carats to a dazzling 239 carats that Lucara had up for auction.