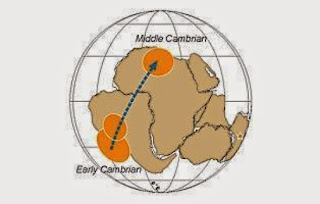 The study, which appears in the August issue of the journal Geology, has implications for the environmental conditions that existed at a crucial period in Earth's evolutionary history called the Cambrian explosion, when most of the major groups of complex animals rapidly appeared.
The team studied the paleomagnetic record of the Amadeus Basin in central Australia, which was part of the Gondwana precursor supercontinent. Based on the directions of the ancient rock's magnetization, they discovered that the entire Gondwana landmass underwent a rapid 60-degree rotational shift, with some regions attaining a speed of at least 16 (+12/-8) cm/year, about 525 million years ago. By comparison, the fastest shifts we see today are at speeds of about four cm/year.
This was the first large-scale rotation that Gondwana underwent after forming, said Ross Mitchell, a Yale graduate student and author of the study. The shift could either be the result of plate tectonics (the individual motion of continental plates with respect to one another) or "true polar wander," in which the Earth's solid land mass (down to the liquid outer core almost 3,000 km deep) rotates together with respect to the planet's rotational axis, changing the location of the geographic poles, Mitchell said.
The debate about the role of true polar wander versus plate tectonics in defining the motions of Earth's continents has been going on in the scientific community for decades, as more and more evidence is gathered, Mitchell said.
In this case, Mitchell and his team suggest that the rates of Gondwana's motion exceed those of "normal" plate tectonics as derived from the record of the past few hundred million years. "If true polar wander caused the shift, that makes sense. If the shift was due to plate tectonics, we'd have to come up with some pretty novel explanations."
Whatever the cause, the massive shift had some major consequences. As a result of the rotation, the area that is now Brazil would have rapidly moved from close to the southern pole toward the tropics. Such large movements of landmass would have affected environmental factors such as carbon concentrations and ocean levels, Mitchell said.
"There were dramatic environmental changes taking place during the Early Cambrian, right at the same time as Gondwana was undergoing this massive shift," he said. "Apart from our understanding of plate tectonics and true polar wander, this could have had huge implications for the Cambrian explosion of animal life at that time."
Other authors of the paper include David Evans and Taylor Kilian.

The above story is based on materials provided by Yale University. Note: Materials may be edited for content and length.