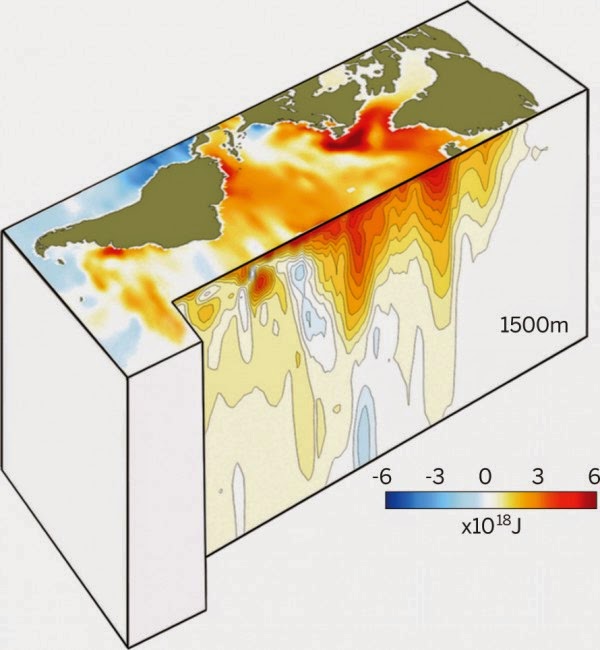 Armchair detectives might call it the case of Earth's missing heat: Why have average global surface air temperatures remained essentially steady since 2000, even as greenhouse gases have continued to accumulate in the atmosphere?

The suspects include changes in atmospheric water vapor, a strong greenhouse gas, or the noxious sunshade of haze emanating from factories. Others believe the culprit is the mighty Pacific Ocean, which has been sending vast slugs of cold bottom water to the surface. But two fresh investigations finger a new suspect: the Atlantic Ocean.

One study, in this issue of Science, presents sea temperature data implying that most of the missing heat has been stored deep in the Atlantic. The other, published online in Nature Climate Change, suggests a warming Atlantic is abetting the Pacific by driving wind patterns that help that ocean cool the atmosphere. But some climate specialists remain skeptical. In a third recent paper, also published online in Nature Climate Change, other researchers argue that the Pacific remains the kingpin.

One reason some scientists remain convinced the Pacific is behind the hiatus is a measured speedup in trade winds that drive a massive upwelling of cold water in the eastern Pacific. But there, too, the Atlantic may be responsible, modeling experiments suggest.

A consensus about what has put global warming on pause may be years away, but one scientist says the recent papers confirm that Earth's warming has continued during the hiatus, at least in the ocean depths, if not in the air.