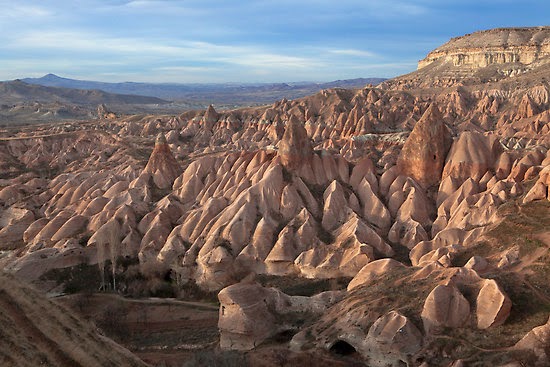 Is a historical region in Central Anatolia, largely in the Nevşehir, Kayseri,Aksaray, and Niğde Provinces in Turkey.

The name “Cappadocia” dates back to Persian times, when the region was called as “katpatukya” meaning “Land of Beautiful Horses”. Since that time Cappadocia has seen the rise and fall of many different civilizations. It is a land of vast plains, rolling hills, rugged mountains and extinct volcanoes. It is a veritable treasure of historical relics from the Chalcolithic era to the Seljuk Turks period. The visitor may seldom travel more then a few miles without encountering some wonderful reminders of Cappadocia's colorful past.

In recent times, Cappadocia became famous for its unique landscape of valleys and unusual rock formations, known as "fairy chimneys". The formation of this strange landscape started during the third geological period, when three volcanoes located on the edges of this region began erupting frequently.

The deposits of volcanoes ash, lava and basalt laid the foundations for today's landscape. Earthquakes and ongoing effects of erosion have contributed to form the valleys and the "fairy chimneys" that can be seen today.


As the rock below the top layer of basalt is extremely soft, it can be easily carved. Communities took advantage of this to make their home in the rock pillars and under the ground. Today, these examples of homes, churches and whole cities abound in Cappadocia.

The surrealistic geological formation of Cappadocia is one of the wonders of the world. It is the result of the natural forces during the intense volcanic activity.

In addition to the European Alps, the Taurus Mountains of southern Anatolia were formed during the Tertiary period of geological development (65 million to 2 million years ago). During the "Alpine period" of mountain-building, deep fissures and large depressed areas were created. The fracturing process allowed the subsurface magma (rocks in their molten state) to find its way to the surface where it formed the Erciyes, Develi, Melendiz, Kegiboydoran, and Hasan Dag cones.

After numerous eruptions these cones increased in size and formed a chain of volcanoes running parallel to the Taurus Mountains. Also the volcanic material slowly ran towards the depressed areas and covered the previously formed hills and valleys. This geological activity changed the general landscape of the region, giving it the appearance of a plateau.


Wind, climate, mechanical weathering, rain, snow, and rivers caused the erosion giving to Cappadocia its unusual and characteristic rock formations. The Cappadocian climate, with sharp changes of temperature, heavy rains, and melting snow in the spring, plays an important role in the formation of the Cappadocian landscape.

In addition, mechanical weathering is responsible for fragmentation because rocks expand when heated and break up as they cool. Frozen water in the cracks can also cause fragmentation. However, the most important sources of erosion are rain and rivers.

Heavy rainfall transformed the smooth surface of the plateau into a complex pattern of gullies that followed preexisting fissures in the rocks. Eroded materials were then removed by the rivers. Sometime streams and rivers made very sharp vertical cuts into the volcanic soil and created isolated pinnacles at the intersection of two or more gullies. Rain and rivers also formed valleys such as Zelve and Goreme. 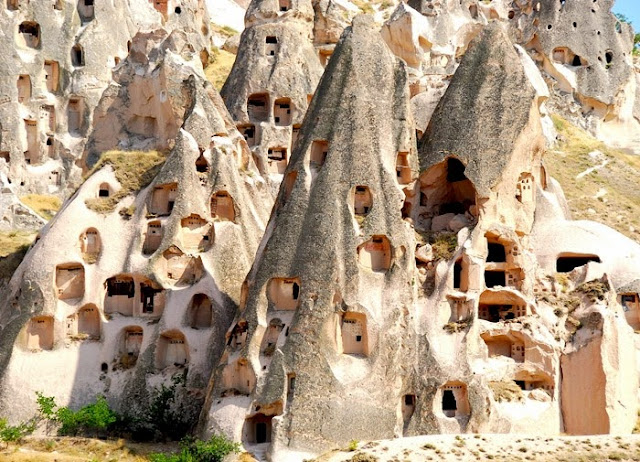