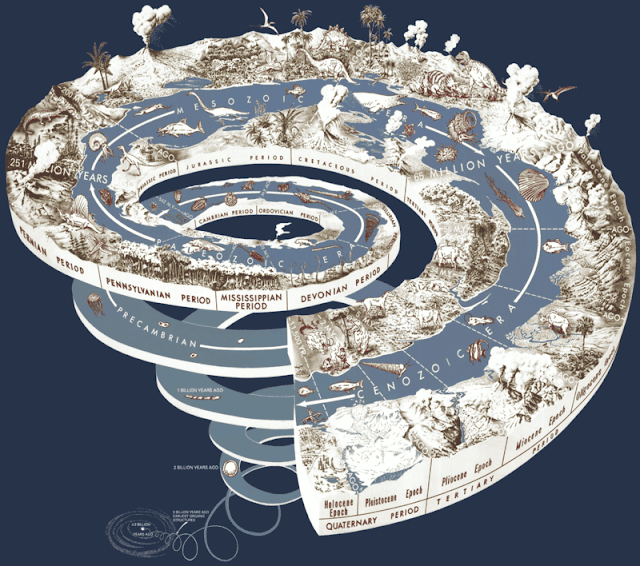 The geologic time scale is an essential tool for understanding the history of Earth and the evolution of life. In this article , explore the principal eons, eras, periods, and epochs that help us track major events in geologic history.

To answer these questions, geologists use a special timeline called the Geologic Time Scale. It's a record of the earth's geologic history as scientists have come to understand it by studying the layers in rock. The geologic time scale is broken up into larger and smaller subdivisions, which help us get a better sense of how historical events fit together. So, in this lesson, we're going to learn how the time scale was created and how its major subdivisions fit together to tell the story of Earth's history.

People have been studying earth and rock formations for a very long time. In the 19th century, geologists took a closer look at the layers that they saw in sedimentary rocks. They noticed that the rock tended to lie in horizontal sections that had different colors, textures, and fossils inside. The top rock layer might have been limestone containing lots of snail fossils.

The next layer may have been chunky conglomerate rock, while the next was a layer of shale and fish fossils. Geologists called these layers of different rock types strata. They studied rock strata all around the world in order to figure out major events in geologic history. Over time, geologists and other scientists put all that information together to make the geologic time scale.

Before we learn the parts of the geologic time scale, let's first talk about how we measure time in our own daily lives. For instance, how do you measure the time it takes to get ready for work or school? Do you measure it in minutes? Hours? Seconds? Days? Chances are you probably measure in minutes. Minutes are fine for measuring daily chores, like driving to an appointment, fixing dinner, or doing the laundry.

But what if you're talking about a bigger chore, like training for a marathon? You probably plan out your preparation on the scale of days, hours, weeks, and months. We measure our age in terms of years. We measure generations in terms of decades. And when we look at human history, we talk about it in terms of hundreds and thousands of years.

The first principal subdivision is called the eon. An eon, the largest division of the geologic time scale, spans hundreds to thousands of millions of years. Geologists generally agree that there are two major eons: the Precambrian eon and the Phanerozoic eon. The Precambrian goes from the formation of the earth to the time when multicellular organisms first appeared - that's a really long time - from 4,500 million years ago to just about 543 million years ago. Then begins the Phanerozoic eon, which continues up to today.

Eons are made up of eras, divisions that span time periods of tens to hundreds of millions of years. The three major eras are the Paleozoic, the Mesozoic, and the Cenozoic. The Cenozoic era is the one we are in today. It began 65 million years ago, right about the time that the dinosaurs went extinct.

Keep in mind that these three eras are all grouped within the Phanerozoic eon. Remember that other eon, the Precambrian eon? Well, that one doesn't get to have any eras inside it. We don't have a lot of information about it, so we leave it as one big chunk in geologic history.

Period is one of several subdivisions of geologic time enabling cross-referencing of rocks and geologic events from place to place.


These periods form elements of a hierarchy of divisions into which geologists have split the earth's history.

An Epoch is a subdivision of the geologic timescale that is longer than an age and shorter than a period. We are currently living in the Holocene Epoch of the Quaternary Period. Rock layers deposited during an epoch are called a series. Series are subdivisions of the stratigraphic column that, like epochs, are subdivisions of the geologic timescale. Like other geochronological divisions, epochs are normally separated by significant changes in the rock layers they correspond to.


Epochs are most commonly used for the younger Cenozoic Era, where a greater collection of fossils has been found and paleontologists have more detailed knowledge of the events that occurred during those times. They are less commonly referred to for the other eras and eons, since less fossil evidence exists that allows us to form a clearer view of those time periods.

10 Interesting Facts About the Geological Time Scale
Share to: