How to Read a Geologic Map

1-Starting on the Ground - Topography on Maps

Geologic maps may be the most concentrated form of knowledge ever put on paper, a combination of truth and beauty. Here's how to understand them.

The map in your car's glove compartment doesn't have much on it beyond highways, towns, shorelines, and borders. And yet if you look at it closely, you can see how hard it is to fit all that detail on paper so it's useful. Now imagine that you want to also include useful information about the geology of that same area.

What's important to geologists? For one thing, geology is about the shape of the land—where the hills and valleys lie, the pattern of streams and angle of slopes, and so on. For that kind of detail about the land itself, you want a topographic or contour map, like those published by the government.
Here's the classic illustration from the U.S. Geological Survey of how a real landscape on the top translates to the contour map beneath it. The shapes of the hills and dales are depicted on the map by fine lines that are contours—lines of equal elevation. If you imagine the sea rising, those lines show where the shoreline would be after every 20 feet of depth. (They could equally well represent meters, of course.) 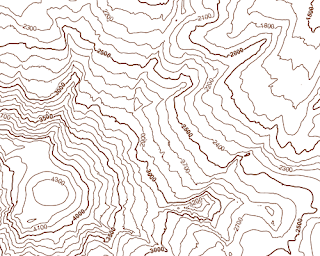 In this 1930 contour map from the U.S. Department of Commerce, you can see the roads, streams, railroads, place names and other elements of any proper map. The shape of San Bruno Mountain is depicted by 200-foot contours, and a thicker contour marks the 1000-foot level. The tops of hills are marked with their elevations. With some practice, you can get a good mental picture of what's going on in the landscape.

Notice that even though the map is a flat sheet, you can still figure out accurate numbers for hill slopes and gradients from the data encoded in the image: you can measure horizontal distance right off the paper, and the vertical distance is in the contours. That's simple arithmetic, suitable for computers. And indeed the USGS has taken all its maps and created a "3D" digital map for the 48 states that reconstitutes the shape of the land that way. The map is shaded through another calculation to model how the sun would illuminate it. 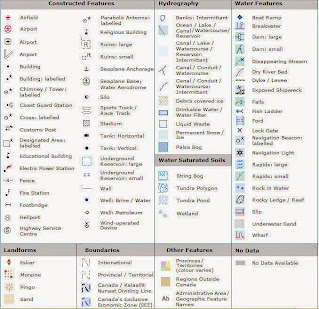 Topographic maps have much more than contours. This sample of a 1947 map from the U.S. Geological Survey uses symbols to indicate the type of roads, significant buildings, power lines and much more. The blue dash-dotted line represents an intermittent stream, one that goes dry for part of the year. The red screen indicates land that is covered with homes. The USGS uses hundreds of different symbols on its topographic maps. 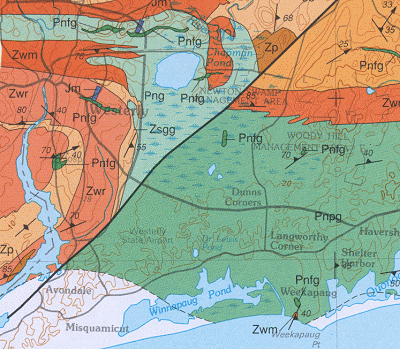 Contours and topography are just the first part of a geologic map. The map also puts rock types, geologic structures and more onto the printed page through colors, patterns and symbols.

Here's a small sample of a real geologic map. You can see the basic things discussed earlier—the shorelines, roads, towns, buildings and borders—in gray. The contours are there too, in brown, plus the symbols for various water features in blue. All of that is on the map's base. The geologic part consists of the black lines, symbols and labels, plus the areas of color. The lines and the symbols condense a great deal of information that geologists have gathered through years of fieldwork. 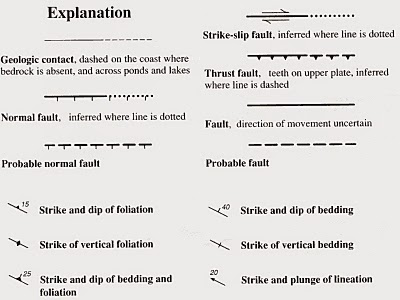 Lines on the map outline various rock units, or formations. Geologists prefer to say that the lines show the contacts between different rock units. Contacts are shown by a fine line unless the contact is determined to be a fault, a discontinuity so sharp that it's clear something has moved there. (see more about the types of faults)

The short lines with numbers next to them are strike-and-dip symbols. These give us the third dimension of the rock layers—the direction they extend into the ground. Geologists measure the orientation of rocks wherever they can find a suitable outcrop, using a compass and transit. In sedimentary rocks they look for the bedding planes, the layers of sediment. In other rocks the signs of bedding may be wiped out, so the direction of foliation, or layers of minerals, is measured instead.
In either case the orientation is recorded as a strike and a dip. The strike of the rock's bedding or foliation is the direction of a level line across its surface—the direction you would walk without going uphill or downhill. Dip is how steeply the bed or foliation slopes downhill. If you picture a street running straight down a hillside, the painted center line on the road is the dip direction and a painted crosswalk is the strike. Those two numbers are all you need to characterize the rock's orientation. On the map, each symbol usually represents the average of many measurements.

These symbols may also show the direction of lineation with an extra arrow. Lineation might be a set of folds, or a slickenside, or stretched-out mineral grains or similar feature. If you imagine a random sheet of newspaper lying on that street, lineation is the printing on it, and the arrow shows the direction it reads. The number represents the plunge, or the dip angle in that direction.

The full documentation of geologic map symbols is specified by the Federal Geographic Data Committee.

The letter symbols signify the name and age of the rock units in an area. The first letter refers to the geologic age, as shown above. The other letters refer to the formation name or the rock type.

A few of the age symbols are unusual; for instance, so many age terms begin with P that special symbols are needed to keep them clear. The same is true for C, and indeed the Cretaceous Period is symbolized with the letter K, from the German Kreidezeit. This is why the meteor impact that marks the end of the Cretaceous and beginning of the Tertiary is commonly called the "K-T event."
The other letters in a formation symbol usually refer to the rock type. A unit consisting of Cretaceous shale might be marked "Ksh." A unit with mixed rock types might be marked with an abreviation of its name, so the Rutabaga Formation might be "Kr." The second letter might also be an age term, particularly in the Cenozoic, so that a unit of Oligocene sandstone would be labeled "Tos."

All of the information on the geologic map, strike and dip and trend and plunge and age and rock unit, is won from the countryside by the hard work and trained eyes of geologists. But the real beauty of geologic maps—not just the information they represent—is in their colors. Let's have a look at them. 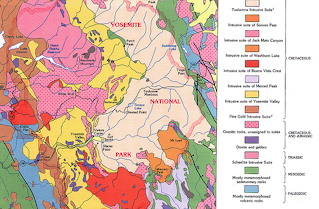 You could have a geologic map without using colors, just lines and letter symbols in black and white. But it would be user-unfriendly, like a paint-by-numbers drawing without the paint. But what colors to use for the various ages of rocks? There are two traditions that arose in the late 1800s, the harmonious American standard and the more arbitrary International standard. A familiarity with these makes it obvious at a glance where a geologic map was made.

These standards are just the beginning. They apply only to the most common rocks, which are sedimentary rocks of marine origin. Terrestrial sedimentary rocks use the same palette but add patterns. Igneous rocks cluster around red colors, and plutonic rocks use lighter shades plus random patterns of polygonal shapes, and both darken with age. Metamorphic rocks use rich, secondary colors as well as oriented, linear patterns. All of this complexity makes geologic map design a specialized art.
Every geologic map has its reasons to vary from the standards. Perhaps rocks of certain time periods are absent so that other units can vary in color without adding confusion; perhaps the colors clash badly; perhaps the cost of printing forces compromises. That is another reason why geologic maps are so interesting: each one is a customized solution to a particular set of needs, and one of those needs, in every case, is that the map be pleasing to the eye. Thus geologic maps, especially the kind that are still printed on paper, represent a dialog between truth.

Read also:
How to Identify Minerals in 10 Steps (photos)
Safety in the Field and General Guidance for Geological Fieldwork
Download the Basic Geological Mapping Book