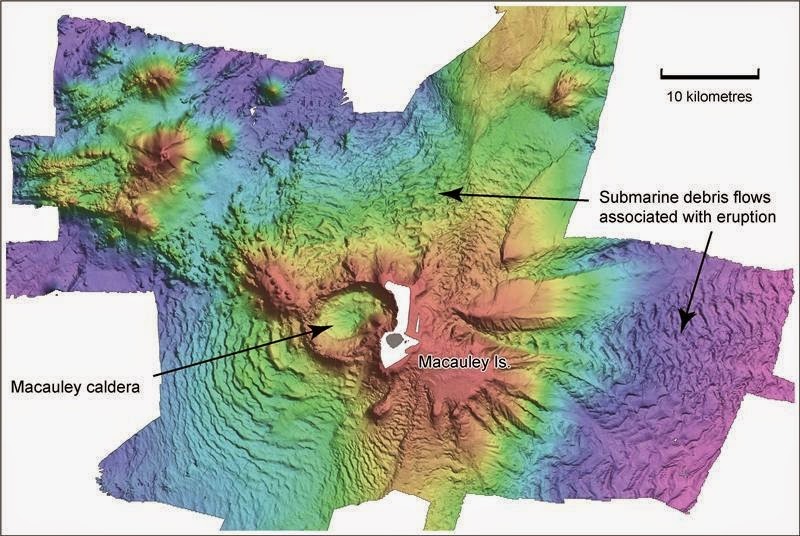 Volcanic eruptions are commonly categorised as either explosive or effusive. But now, in research published this month in Nature Geoscience, researchers at Victoria University, Wellington and the National Oceanography Centre in Southampton have uncovered a previously undocumented type of eruption in underwater volcanoes -- by looking at tiny original bubble spaces trapped in volcanic rock.
Inside volcanoes, gases are dissolved in the molten magma as a function of the very high pressures and chemistry of the magma. In the same way that gases dissolved in carbonated drinks bubble up when you take the lid off, when magma is erupted as lava, the pressure is relieved and the gases exsolve to form small gas bubbles or so-called "vesicles." In explosive eruptions these vesicles expand so quickly they fragment the magma, violently ejecting lava, which cools and degasses to form solidified pumice that can be sufficiently light to float on water.
In air pumice is obviously associated with violent, explosive eruptions. Consequently underwater volcanoes flanked by highly vesicular pumice have, to date, also been interpreted as having erupted explosively.
But the results of this study indicate that there is a third eruptive style unique to underwater volcanoes, which is neither effusive nor explosive.
"By documenting the shape and density of bubbles in pumices generated by an underwater caldera volcano in the southwest Pacific Ocean -- the Macauley volcano -- we found large differences in the number and shape of "bubbles" in the same pebble-sized samples, different to anything previously documented," said Professor Ian Wright of the National Oceanography Centre, who co-authored the paper.
"This range of bubble densities distinct in these pumice samples indicates that the lava erupting from the caldera was neither vigorous enough for an explosive eruption, nor gentle enough for an effusive flow."
The study proposes that rather than exploding in the neck of the volcano, the formation and expansion of bubbles in the magma created a buoyant foam, which rose to the seafloor and then buoyantly detached from the volcano as molten pumice balloons but with chilled margins. During its ascent to the sea surface, the vesicles within the molten interior would have continued to expand as the pressure -- this time from the weight of the seawater -- reduced.
"These processes explain the unique bubble structure seen in the samples analysed, which could have only occurred with an intermediate eruption style and in an underwater setting," said Professor Wright.
"We conclude that the presence of widespread deposits of pumice on underwater volcanoes does not necessarily indicate large-scale explosive volcanism."
The authors proposed that this style of eruption be named Tangaroan, the Maori god of the sea, and name of the research vessel used to collect the samples.
The study was led by Melissa Rotella, Professor Colin Wilson and Simon Barker from the School of Geography, Environment and Earth Sciences at the Victoria University of Wellington, New Zealand.