Some Facets of the Geology of Diamonds 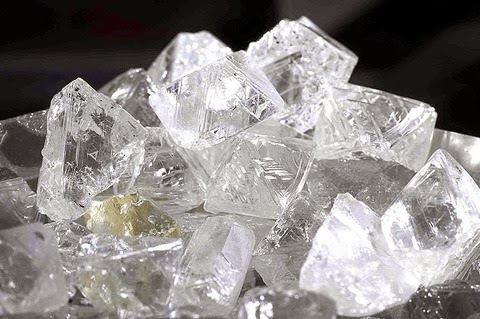 Geoscientists can’t say if diamonds are forever, but they can say that some are already billions of years old. They form in a place we’ll never reach: the deep earth, hundreds of kilometres under our feet. Diamonds tell us much about this hidden world and how it is linked to the surface – and life – in surprising ways.

Diamonds are made of carbon atoms which are densely packed into a structure that is extremely strong. On earth they form only under extreme pressures – under conditions very unfamiliar to us surface-dwellers. Some form in the sudden shock-waves created when material from space hits the earth. The global impact layer found suspiciously close in time to the extinction of the dinosaurs contains countless tiny diamonds. Impact diamonds are rare. Most diamonds, certainly any big enough to put in an engagement ring, form slowly within the deep earth.

Imagine a slab of concrete – about 5cm thick – resting on your chest. The pressure is small, but tangible. The pressure found in the deepest ocean is equivalent to some 80,000 of such slabs. Diamonds form at pressures that are at least 45 times greater still, equivalent to millions of slabs or hundreds of kilometres of rock. The earth’s deep interior is a place where even rocks are transformed by the massive pressure.

Natural diamonds don’t form, Superman-style, by the application of pressure directly to other solid forms of carbon (such as coal). They grow by the interaction between a carbon bearing fluid and rock – typically involving redox reactions such as the breakdown of CO2 or methane. Diamonds show complex patterns that suggest they grow gradually. Studies of diamonds from a single area often show a wide distribution of ages, from over 3 billion years old to a few hundred million.

Diamonds form within the earth’s mantle, the thick layer between the thin crust and earth’s metal core. They are particularly associated with parts of the mantle that are stuck to the bottom of long-lived continental crust. Here the mantle forms stable ‘keels’ and doesn’t take part in the convection-driven movements that happen lower down. The portions of stable crust with keels are called cratons – the largest are found in North America, Africa and Australia -all areas rich in diamond mines.

Cratonic keels are very stable, but are not totally insulated from the dramatic events in the rest of the dynamic earth. Subduction at the edge of cratonic plates allows oceanic crust to sink deep into the mantle underneath the craton. Carbon-bearing fluids from the sinking oceanic crust rise into the cratonic keel and may cause a phase of diamond formation. Mantle plumes, columns of hotter rock rising from the base of the mantle can do likewise.

In contrast to how they form, the way diamonds reach the surface involves one of the quickest and dramatic geological events we know. Most diamonds reach the surface brought up within an odd type of molten rock called Kimberlite. This magma forms at great depth in cratonic keels and is rich in volatile elements such as CO2 which makes it highly pressured. If it is able, it will rise to the surface extremely quickly through vertical fractures. At the surface it forms a carrot-shaped pipe which nowadays is often the site of a large circular diamond mine.


Diamonds and other deep minerals are brought to the surface as fragments within the kimberlite magma. Diamonds are able to survive the rough-and-tumble of the eruption very well, but it helps that the eruption events are very quick. Not just geologist-quick, but normal-folk quick. Estimates are that diamonds travel to the surface in at most months but maybe as quick as a few hours. Diamonds are only stable under surface conditions because they are too cold to change their structure. The speed with which they reach the surface and cool down keeps them beautiful and prevents them from turning into worthless graphite on the way up.

Some diamonds are not conventionally beautiful. They contain blemishes, tiny blebs of fluid or inclusions of other minerals that dim their brilliance. But to geologists these are the most attractive diamonds of all. Listen to them carefully and they will whisper secrets about a place we’ll never reach – the deep earth.

The deep earth is only a few hundred kilometres below your feet, but is completely inaccessible. The deepest hole ever drilled is a puny 12.2 kilometers. At diamond depths the rocks are at temperatures over 1000°C – few man-made materials can survive such conditions.

Fortunately we can tell a lot remotely. Seismologists gather information on the way waves created by earthquakes pass through the earth and they can dimly make out structures at great depths. This ‘seismic tomography’ applies the same principles that PET or MRI scanners use to study a human body. Such tools are useful, but in medicine as in geology, sometimes direct sampling of the interior is required: kimberlites act like biopsies, making samples of the interior available for detailed study.

A tremendous range of experimental techniques have been used to study diamonds and their inclusions. Some have poetic-sounding names (“Raman spectroscopy”) but many do not (“combustion analysis”, “laser ablation ICPMS”). Most are used to measure the elemental composition of the minerals or the isotopic makeup of those elements. These data are not just of interest to chemists.

The chemistry of mineral inclusions can yield information about the pressures and temperatures at which they (and the diamond) formed. Radioactive isotopes can be used to estimate the age of formation.

Stable isotopes tell some of the most remarkable stories in the earth sciences. Particular processes create distinctive isotopic signatures that may be preserved through a whole range of subsequent events. One isotopic signature only forms when ultraviolet light interacts with sulphur in an oxygen-poor environment. This signature has been found in diamonds, meaning that they contain material that was once at the surface (rock is a very good sun-block, so UV reactions do not occur inside the earth). Also, the sulphur was at the surface very early in Earth history, before photosynthesis caused atmospheric Oxygen levels to rise.

Photosynthesis has its own distinctive isotope signature, affecting carbon. Some diamonds contain this ‘light carbon’, meaning they are formed from life itself. They are the most amazing type of ‘fossil’ imaginable. Some living organism ended its life as a smear of black carbon in a sedimentary rock. It was then buried deep by subduction. Some of its atoms rose up again, first in fluid and then as part of a diamond, suddenly flung to the surface for us to find and marvel at. This deep loop of the carbon cycle is small in terms of volume but conceptually it is enormous. The cycling of carbon between plants, animals and the atmosphere is well know. Uncomfortably, we are becoming more aware of the additional link between buried coal, atmospheric carbon and climate. But the far deeper cycling of carbon into the mantle, demonstrated by diamonds is only recently proven. We can never reach the deep earth, yet it is intimately linked to surface via the subduction of oceanic crust.

Not all diamonds form from surface material. Carbon has been part of the mantle since the formation of the earth and this carbon forms diamonds too. Tracing types of mineral inclusions, it is possible to distinguish diamonds formed from subducted material from other types. This reveals an interesting pattern: diamonds that are older than 3 billion years show no trace of subducted material. This suggests – consistent with other evidence – that plate tectonics as we know it was not active in the very early earth. Subduction may only have started 3 billion years ago.

Most diamonds form in the upper reaches of the mantle but some come from deeper down. These ‘sub-lithospheric diamonds’ form in the part of the mantle that slowly circulates in convection currents. This lower mantle forms the majority of the earth by volume, yet is poorly understood. At these depths only exotic minerals are stable, traces of which are found as tiny inclusions within diamonds. The only other place we can see these materials is in the laboratory. Here ‘anvils’ are used to squeeze tiny samples to tremendous pressures. The material they are made of is very strong, but also transparent, so that observations can be made and lasers fired through it to heat the samples. What are these special anvils made of? Diamonds, of course. These are precious stones indeed.

The above story is based on materials  Note: Materials may be edited for content and length.
Share to: