Iceland lava field is the biggest in 200 years 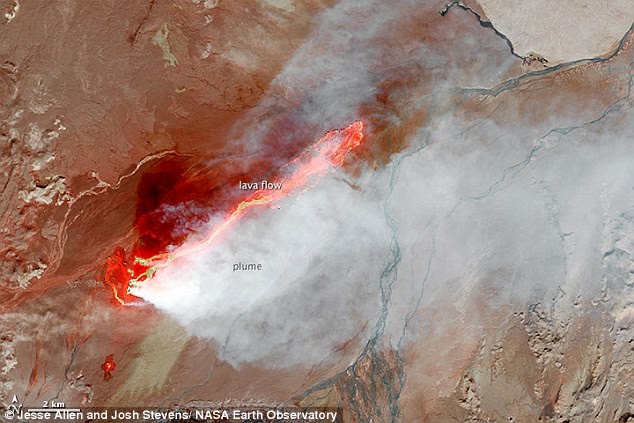 Bigger than the island of Manhattan, the lava flow from the Holuhraun lava field in Iceland is now the largest the country has seen in more than 200 years, according to NASA’s Earth Observatory.

Since August of last year, massive amounts of lava have been spewing from a fissure that erupted in Iceland’s largely uninhabited Bárðarbunga volcanic system.

In the past six months, the lava flow spread a total of 32 square miles, making it now the largest lava flow since the 1783–84 Laki eruption that wiped out 20 percent of Iceland’s population.

The infrared images below show the Holuhraun lava flow from Sept. 6, 2014, left, and Jan. 3, 2015, right. The pictures were captured by the Operational Land Imager on Landsat 8. (Jesse Allen and Josh Stevens/ NASA Earth Observatory)

According to the University of Iceland’s Institute of Earth Sciences, the eastern part of the lava field was about 30 feet thick, and the center and western parts were about 40 feet thick.

Adam Voiland of NASA wrote: “While Holuhraun continues to spew copious amounts of lava and sulfur dioxide, some observations suggest the eruption may be slowing down. … This doesn’t mean that the eruption will stop soon. Like the weakening spray from an aerosol can, the eruption rate declines exponentially. The lower the flow, the more slowly it declines.”
Washington Post.
Share to: