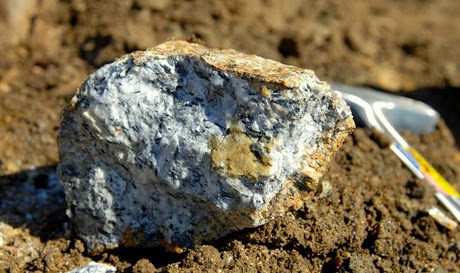 Geologists are exploring deposits of rare earth elements (REE) found in the Mourne mountains, County Down.
Also known as critical metals, they are sought-after materials for the production of high-tech electronics, as well as wind turbines and electric cars.
Scientists currently believe the finds are not commercially viable but say they are scientifically significant.
Plans to make the Mournes a National Park were shelved in 2012.
Dr Mark Cooper of the Geological Services of Northern Ireland (GSNI) said the finds first came to light following a survey of river water, sediments and soils throughout Northern Ireland.
Further research fieldwork is now being carried out in the Mournes by geologists from the Camborne School of Mines, based at the University of Exeter, in Devon.
The aim of the research is to improve the understanding of where REE deposits are found and how they are formed. This knowledge will be useful for geologists around the world searching for the critical metals.
It will also determine the concentration of deposits in the Mournes, which are currently estimated to be too small to be worth mining.
Rare and useful

REE is a term used to describe 15 elements from the periodic table, known scientifically as lanthanides, along with scandium and yttrium, that all occur naturally together in the ground.
They are used in the production of smartphones, lasers and the magnets found in motors and generators. They make magnets more efficient, and longer lasting.
Ninety percent of REE are mined in China.
China limited the export of REE in 2010, and many industries that rely on them moved their factories to China in response.
In 2013 the World Trade Organisation ruled that China's export ban was against its rules, and the restrictions were lifted.
The demand for REE is expected to rise in the future due, in part, to the growing demand for electric cars and wind turbines.
Sweeping down to the sea

The Mourne mountains inspired William Percy French to pen the lyrics to the popular folk song The Mountains of Mourne.
In 2012 local land owners resisted plans to make the Mournes a National Park, over fears of restrictions to land use.
Dr Siobahn Power of the Mourne Cooley Gullion Geotourism project said the Mournes would be a good candidate for Geopark status, which would promote tourism without restricting land use.
"The Mournes are unique. They tell the story of the closing of the Iapetus ocean, which was here 55 million years ago, and the opening of the Atlantic ocean," she said.
Dr Power added: "This area definitely has the geology for Geopark status."
Proponents of Goeparks say they attract visitors, but unlike National Parks, they do not require areas to be fenced off. Visitors are not charged fees to access Geoparks.
BBC
Share to: