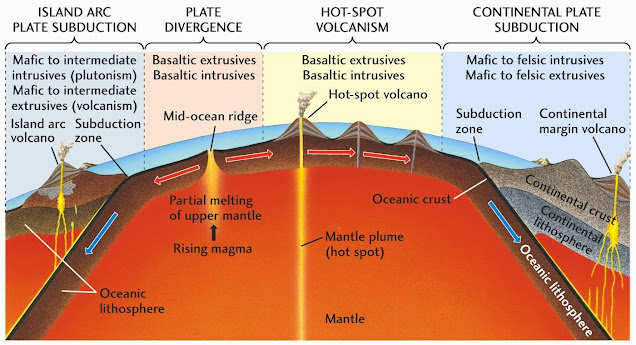 Let's say you're on a scavenger hunt and the last item you need to find is an igneous rock. You learned that igneous rocks are rocks that form from the cooling and solidifying of magma or lava, which is the name given to magma that reaches the surface of the earth and the stuff you think of flowing down the side of a volcano.

Armed with this knowledge you might hop on a plane and fly to the closest active volcanic mountain to hunt for an igneous rock.

Well, this would be one option open to you, but did you know that igneous rocks can also be found at the bottom of the ocean as well as deep underground? This is because igneous rock formation is linked to the movement of tectonic plates. we will learn more about tectonic plates and how their movements lead to the formation of igneous rocks.

So let's start by making sure we understand what tectonic plates are. There is a theory, called plate tectonics, which states that the Earth's crust is broken up into plates. In other words, if you were to strip everything off of the Earth's surface and drain all of the water, the remaining shell of the planet would look like it was cracked, much like the fractures that happen when you crack the shell of a hardboiled egg.

The plate-like sections of earth's crust are called tectonic plates.

These massive tectonic plates are able to move and they basically float on top of the hot, deep layers of the earth. These hot, deep layers are where we see magma forming. As these plates float around, they interact with each other. They can either get closer together or drift apart, and this tectonic plate movement gives us the right conditions for the formation of igneous rocks.

What's the difference between an active and passive continental margin?

Let's take a look at igneous rock formation where tectonic plates move apart or diverge. As these massive plates of the earth's crust slowly separate from each other, magma from below the crust has an opportunity to squeeze up through the gap and reach the surface. This can even happen if the boundary between plates is found at the bottom of the ocean. In fact, diverging tectonic plates are responsible for the formation of the Mid-Atlantic Ridge, which is a continuous mountain chain located under the surface of the sea. As the magma makes its way through the opening created by the diverging plates, the magma meets up with the cooler temperatures, allowing it to solidify into igneous rock.

Igneous rocks can also form where plates bump up against each other. Sometimes when tectonic plates converge they create an area where one tectonic plate is pushed under another plate. This area is referred to as a subduction zone. The subducting plate is pushed into the hotter, deeper layers of the Earth, where it melts. This newly melted rock is less dense than the solid rock it originated from, so it starts to rise toward the surface. It will either solidify underground or make its way to the surface as lava and then solidify, but either way it will form igneous rock.


Read also:
Epithermal Systems (The association of gold mineralization with volcanic)
Isotopes as tracers of magmatic sources
The largest volcano on the Earth
Share to: