Geysers have loops in their plumbing 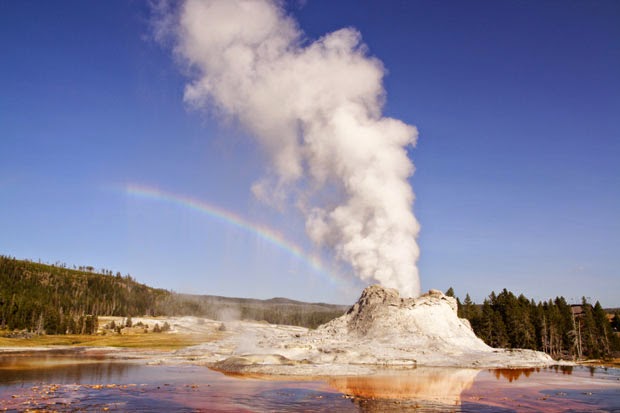 Geysers like Old Faithful in Yellowstone National Park erupt periodically because of loops or side-chambers in their underground plumbing, according to recent studies by volcanologists at the University of California, Berkeley.

The key to geysers, said Michael Manga, a UC Berkeley professor of earth and planetary science, is an underground bend or loop that traps steam and then bubbles it out slowly to heat the water column above until it is just short of boiling. Eventually, the steam bubbles trigger sudden boiling from the top of the column, releasing pressure on the water below and allowing it to boil as well. The column essentially boils from the top downward, spewing water and steam hundreds of feet into the air.


“Most geysers appear to have a bubble trap accumulating the steam injected from below, and the release of the steam from the trap gets the geyser ready to erupt,” Manga said. “You can see the water column warming up and warming up until enough water reaches the boiling point that, once the top layer begins to boil, the boiling becomes self-perpetuating.”
The new understanding of geyser mechanics comes from Manga’s studies over the past few years of geysers in Chile and Yellowstone, as well as from an experimental geyser he and his students built in their lab. Made of glass with a bend or loop, it erupts periodically, though, surprisingly, not as regularly as a real geyser they studied in the Atacama desert of Chile, dubbed El Jefe. Over six days of observation, El Jefe erupted every 132 seconds, plus or minus two seconds.
“At many geysers it looks like there is some cavity that is stuck off on the side where steam is accumulating,” Manga explained. “So we said, ‘Let’s put in a cavity and watch how the bubble trap generates eruptions.’ It allows us to get both small eruptions and big eruptions in the lab.”
Manga and his colleagues, including first author Carolina Munoz-Saez, a UC Berkeley graduate student from Chile, report their findings on the Chilean geysers in the February 2015 issue of the Journal of Volcanology and Geothermal Research. A description of the laboratory geyser appeared in the September 2014 issue of the same journal.
Balance of pressure and temperature
Fewer than 1,000 geysers exist around the world – half of them in Yellowstone – and all are located in active or formerly active volcanic areas. Water from the surface trickles downward and gets heated by hot magma, eventually, perhaps decades later, rising back to the surface in the form of hot springs, mud pots and geysers.
Why geysers erupt periodically, some with a regularity you can set a clock by, has piqued the interest of many scientists, but German chemist Robert Bunsen was the first to make pressure and temperature measurements inside a geyser – the Great Geysir in Iceland, after which geysers are named – in 1846. Based on these measurements, he proposed that eruptions start when water starts to boil at the surface, reducing pressure within the superheated water column and allowing boiling to propagate downward from the surface. Pressurized water boils at a higher temperature, so reducing the pressure on overheated water allows it to boil.
Since then, Manga said, a few researchers have stuck video cameras into geysers and seen features that suggest there are underwater chambers or loops that trap steam bubbles. Manga’s measurements in Yellowstone and Chile link the temperature and pressure changes down the water column with the underground plumbing to explain the periodic eruptions.
Geysers key to understanding volcanoes
Manga studies geysers to gain insight into volcanic eruptions, which bear many similarities to geysers but are much harder to study. Manga and his students feed temperature and pressure sensors as deep as 30 feet into geysers – something impossible to do with a volcano – and correlate these with above-ground measurements from seismic sensors and tiltmeters to deduce the sequence of underground events leading to an eruption. They have also been able to submerge video cameras as deep as six feet into geysers to view the submerged conduits and chambers below. He hopes to be able to extrapolate his findings to volcanoes, deducing the internal mechanics from exterior seismic and gravity measurements.
But geysers are fascinating in themselves, he said.
“One of our goals is to figure out why geysers exist – why don’t you just get a hot spring – and what is it that controls how a geyser erupts, including weather and earthquakes,” he said.
In this month’s publication, Manga and his students report on El Jefe (“the chief”), a geyser located at an elevation of about 14,000 feet in the El Tatio geyser field in Chile, where water boils at 86 degrees Celsius (187 degrees Fahrenheit) instead of 100 (212 degrees F). In 2012, they recorded internal and external data during 3,600 eruptions over six days. They compared these to above-ground measurements at Lone Star and other geysers in Yellowstone. Invasive measurements are forbidden in the park.
They concluded that Bunsen was essentially correct – boiling starts at the top of the superheated water column and propagates downward – but also that it’s the escaped bubbles from trapped steam in the rock conduits below the geyser that heat the water column to the boiling point. As the entire water column boils out of the ground, more than half the volume of stuff emerging is steam, though most of the mass is liquid water, they found. The plume seen from afar is mostly steam condensing into water droplets in the air, Manga said.
Share to: