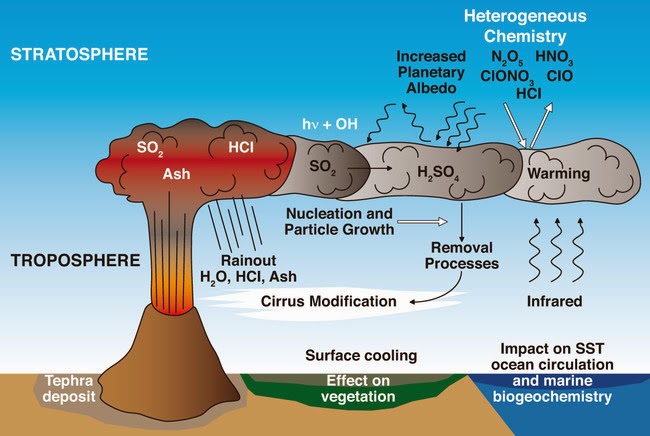 Particles emitted during major volcanic eruptions cool the atmosphere due to a 'parasol' effect that reflects sunlight. The direct impact of these particles in the atmosphere is fairly short, lasting two to three years. However, they alter for more than 20 years the North Atlantic Ocean circulation, which connects surface and deep currents and influences the climate in Europe. This is the conclusion of a study by researchers from the CNRS, IRD, CEA and Météo‐France* who combined, for the first time, climate simulations, recent oceanographic data, and information from natural climate records. Their findings** are published in Nature Communications on March 30th.

The Atlantic Ocean is home to variations in surface temperatures that last for several decades, affecting Europe's climate. This slow variability is caused by changes in the ocean circulation, which connects surface to deep currents and transports heat from the tropics to the Norway and Greenland seas. However, the reason for this variability is still poorly understood.
In order to elucidate its mechanisms, the researchers first used information from the natural climate record covering the last millennium. By studying the chemical composition of water from ice cores in Greenland, they were able to estimate past temperature changes. The data highlights the close connection between the surface temperature of the Atlantic Ocean and air temperatures over Greenland, showing that climate variability in the region is a periodic phenomenon some of whose cycles, or oscillations, last around twenty years.
By using numerical simulations from more than twenty different climate models, the researchers also showed that major volcanic eruptions, like that of Mount Agung, Indonesia, in 1963, or Pinatubo in the Philippines in 1991, could significantly alter ocean circulation in the North Atlantic. This is because the large quantities of particles emitted by these eruptions into the upper atmosphere reflect part of the solar radiation, rather like a parasol, causing the climate at Earth's surface to cool. The cooling, which only lasts two or three years, then triggers a rearrangement of ocean circulation in the North Atlantic Ocean. Around fifteen years after the beginning of the eruption, the circulation speeds up. It then slows down after twenty-five years, before accelerating again thirty-five years after the phenomenon. Volcanic eruptions thus appear to act on the ocean circulation in the North Atlantic rather like a pacemaker, causing variability over a twenty-year period.
The scientists confirmed these results by comparing them with observations of ocean salinity, a key factor for the sinking of water and therefore for ocean circulation. In numerical simulations and modern oceanographic data they detected similar variations in the early 1970s and 1990s connected to the eruption of the Agung volcano. Using data from Greenland ice cores and observations carried out on bivalve molluscs collected to the north of Iceland and dating back more than 500 years, as well as a simulation of the climate over the last thousand years, the researchers systematically identified acceleration of ocean circulation fifteen years after five volcanic eruptions that took place several hundred years ago.
Lastly, the researchers revealed the interference produced by the latest three main eruptions, Agung in 1963, El Chichón in Mexico in 1982, and Pinatubo in 1991, explaining for the first time the recent variability of currents in the North Atlantic ocean. They conclude that a major eruption in the near future could have an impact on the currents in the North Atlantic Ocean -- and hence on our ability to predict the variability of the climate in Europe -- over several decades. They now hope to consolidate these findings by collecting data from additional sources, especially in paleoclimatology.
* From the Laboratoire Environnements et Paléo-environnements Océaniques et Continentaux (CNRS/Université de Bordeaux), Centre National de Recherches Météorologiques -- Groupe d'Etude de l'Atmosphère Météorologique (CNRS/Météo France), and Laboratoire d'Océanographie et du Climat: Expérimentations et Approches Numériques (CNRS/UPMC/MNHN/IRD) and Laboratoire des Sciences du Climat et de l'Environnement (CNRS/CEA/UVSQ), both part of the Institut Pierre Simon Laplace.
**The project was funded by the Agence Nationale de la Recherche via the 'Groenland Vert' project in the 'Changements Environnementaux Planétaires et Société' program (2011-2015).

The above story is based on materials provided by CNRS. Note: Materials may be edited for content and length.
Share to: