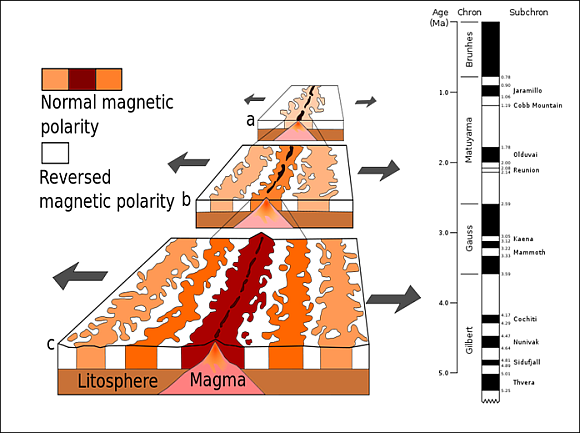 Sea floor spreading is the process by which new oceanic crust is formed by the upwelling of magma through diverging tectonic plates.

Imagine you are a scientist living in the 1800s. The first somewhat useful submarines were starting to appear, yet these early vessels were not well-suited for exploring the tremendous depths of the oceans. So, you would have been left with little more than speculation as to what the ocean floor looked like. And, you would have likely shared the opinion of many in the scientific community at that time, who considered the ocean floor to be a relatively flat surface with few distinct features.
But then, along comes World War I, and with it, new technology, such as echo-sounding devices that bounce sound signals off of the ocean floor to measure the seafloor depths. What this technology revealed was a surface that was far from flat and featureless. In fact, it demonstrated the existence of an underwater mountain range, which would later be called the Mid-Ocean Ridge. Little was it known at the time, but this discovery held the clues that would soon unlock two mysteries of planet earth, sea floor spreading and polar reversal.

As ocean exploration continued into the middle of the 20th century, scientists started to detect some peculiar magnetic readings coming from the ocean floor. The fact that the ocean floor could give off a measurable magnetic reading was not surprising, because by this time in history, scientists understood that the main component of the ocean floor was an iron-rich, volcanic rock called basalt. Basalt contains magnetic minerals that give the rock its magnetic properties.
The surprising finding was that the ocean floor contained stripes of rock with different polarities. So, some of the stripes of ocean floor would have normal polarity, meaning that the minerals in those rocks produced a magnetic field aligned in the same direction as the earth's present-day magnetic field. Meanwhile, other stripes demonstrated reversed polarity or a magnetic field aligned in the opposite direction as the earth's present-day magnetic field. What was going on?
Scientists were baffled as to what could cause the magnetic variation. Then, they discovered a pattern of alternating stripes leading away from the center of the mid-ocean ridge, and pieces of the puzzle started to take shape. What they noticed was that the stripe of ocean floor closest to the ridge had normal polarity, but the next stripe out revealed reverse polarity. This alternating pattern continued the farther the investigators got from the ridge. This revelation led scientists to hypothesize that the method by which ocean ridges formed could explain this polar reversal phenomenon. And they were right!
Share to: