A new chapter in Earth history 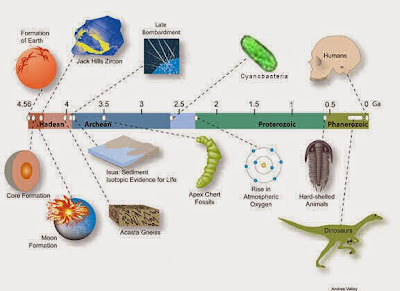 An international group of scientists has proposed that fallout from hundreds of nuclear weapons tests in the late 1940s to early 1960s could be used to mark the dawn of a new geological age in Earth history – the Anthropocene.
The study, led by Dr Colin Waters of the British Geological Survey, published new research in the Bulletin of the Atomic Scientists. The research involved 10 members of the Anthropocene Working Group that is chaired by Professor Jan Zalasiewicz of the Department of Geology at the University of Leicester and Gary Hancock, a world expert on plutonium in the environment.
The researchers state that the mid-twentieth century coincides with the 'Great Acceleration' of human population growth, economic development and industrialization. The emergence of megacities, facilitated by the production of huge quantities of concrete, is coincident with earth movement on a vast scale. Mineral exploitation has resulted in the generation of marked geochemical signatures across the globe and this age of hydrocarbon burning has resulted in greatly increased carbon emissions. Humanity's modification of the planet has caused an increase in species extinctions and invasions. All these features are being expressed in the sediments accumulating across the planet and will be recognizable to the geoscientists of the far future.
They pose the question: "If the sum of these changes is a recognition that we now live in a new epoch, the Anthropocene, how can we define when it started?"
The standard practice for defining geological time units is to identify a single reference point (or "golden spike") that fixes the lower boundary of the time unit within a succession of rock or sediment layers. The boundary should be characterized by a signature that is both rapidly developed and wide-spread. The proposal led by Dr Waters is that the programme of atmospheric nuclear weapons testing may have generated such a signature.
Dr Waters said: "It is sobering to think that the actions of humanity over a few short years in the mid-20th century created such large amounts of artificial radionuclides that scattered across the Earth as fallout, producing a signal in modern strata that, in the case of plutonium, will be a detectable for about 100,000 years into the future".
Starting with the 1945 detonation of the Trinity device in New Mexico, the extent of such fallout was initially quite localized. But with the introduction in 1952 of the much larger "thermonuclear" or "hydrogen" weapons tests, the fallout dispersed over the entire Earth surface. The amount of fallout peaked in 1962, the year before the Partial Nuclear Test-Ban Treaty largely drove the nuclear detonations underground. The 1952 rise in abundance of the isotope plutonium-239 is preferred as it is rare in nature, is a significant component of fallout, is relatively immobile in sediments, has a long half-life so will persist long into the future and the rise is broadly coincident with the onset of the "Great Acceleration".
Professor Zalasiewicz said: "The Anthropocene has struck a chord in the wider world that none of the other geological time units have done – not even the dinosaur-haunted Jurassic. Human beings don't merely inhabit the world. They alter it, on an increasingly epic scale."
In 2016, the Anthropocene Working Group hopes to make recommendations on whether this new time unit should be formalized and, if so, how it might be defined and characterized.
Provided by University of Leicester
Share to: