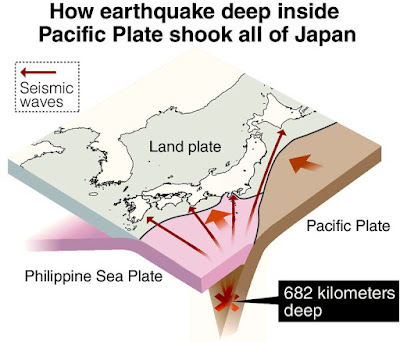 The Yomiuri Shimbun The main reason why the earthquake that occurred west of the Ogasawara Islands on Saturday night shook most parts of the country — in addition to the temblor’s strength — was that the quake’s focus was extremely deep, according to seismologists and the Japan Meteorological Agency.

The shaking was remarkably strong in the Kanto region. Seismologists attribute this to fact that the seismic waves reached the region after passing through undersea tectonic plates, which are harder than land plates and transmit waves more easily.

The agency said strong seismic waves can reach faraway places in such a “region of abnormal seismic intensity.”

Prof. Takashi Furumura of the University of Tokyo’s Earthquake Research Institute said that tectonic plates lie on top of one another in a complicated way under the Japanese archipelago and under the surrounding seas.

The Pacific Plate is the deepest and descends mainly below the Philippine Sea Plate, reaching deep under the Japanese archipelago.

Yuichiro Tanioka, a professor of seismology at Hokkaido University, said: “Undersea plates are harder than land plates. Thus, seismic waves running through the plates [under the sea] tend not to weaken.”

This is probably why, seismologists said, the waves did not weaken remarkably.

In September 2013, a magnitude-6.8 earthquake occurred about 450 kilometers deep off Torishima island of Tokyo. The quake produced shaking of up to 4 on the Japanese seismic intensity scale of 7 in wide areas from Hokkaido to the Kanto region.

A magnitude-6.7 earthquake occurred about 370 kilometers deep off Kyoto Prefecture in July 2007, shaking a wide range of places. Hokkaido, far from the epicenter, recorded shaking of up to 4 on the Japanese seismic intensity scale.