Understanding the softness in Earth's lithosphere 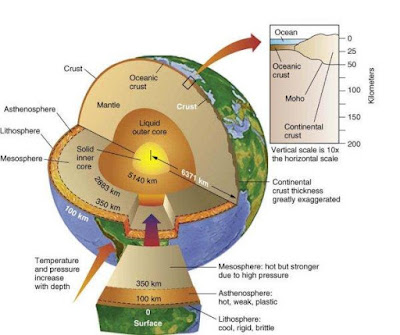 Yale researchers have proposed a new model to explain the drop in elastic stiffness in the middle of the Earth's continental lithosphere.

Lithosphere is the stiff layer of rock that lies atop the slow-motion convection of Earth's solid, yet ductile, interior. It is the "plate" of plate tectonics, the system of interlocking fragments that explains earthquakes, volcanoes, and even the long-term variation of carbon dioxide in the atmosphere.

A softening in the middle of the continental lithosphere was discovered when seismologists studied the structure of the United States. This same softening was observed in other continents as well, at a depth of 80 to 150 km. Researchers found the phenomenon puzzling, because softening detected by seismology is usually linked to softening that occurs over millions of years (also known as geologic time). If that were the case, the continental lithosphere would have a weak layer in it, and it would be difficult to explain the continents' long-term stability.

Yale geophysicists Shun-ichiro Karato, Tolulope Olugboji (a former Yale student, now at the University of Maryland), and Jeffrey Park may have found the answer.

In a study published June 15 in the journal Nature Geoscience, they present a new model to describe the phenomenon. They say the softening is a natural consequence of the way rocks deform as temperatures rise below the melting point. The key is that this softening occurs in a second or less (the seismic time scale), rather than over millions of years.

Rocks are composed of strong mineral crystals separated by grain boundaries, where atoms are disordered and weaker. As temperature increases, the mineral grains remain strong, but grain boundaries weaken and allow sliding to occur. As a consequence of this sliding, the overall stiffness of a rock is reduced at the seismic time scale, but not the geological time scale.

"Our model is consistent with a stable continent, because the weakness of grain-boundary sliding is limited to deformation of the lithosphere in approximately one second, not its long-term deformation," Karato said.