A rock worth $5.4 trillion is flying by Earth this weekend and here's how to watch 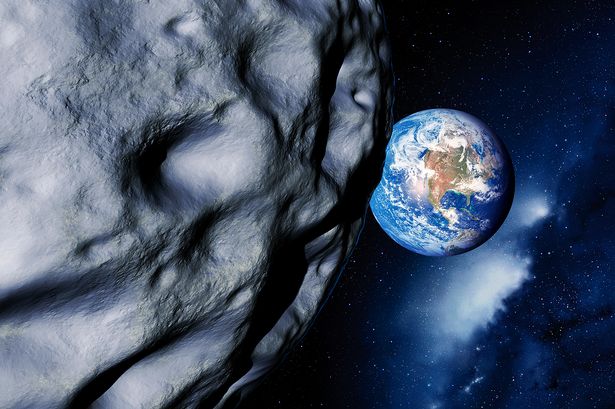 An asteroid worth a potential THREE TRILLION POUNDS is set to pass tantalisingly close to Earth on Sunday night.

Asteroid UW-158 is thought to have a 90 million tonne core of platinum and will be 30 times closer than the nearest planet at around 10pm - and stargazers will be able to enjoy the spectacle live.

Slooh, a project which links telescopes to the internet for public use, will be broadcasting images from an observatory in the Canary Islands.

Slooh Astronomer Bob Berman said: "It's always fun when an asteroid whooshes past our world so the Slooh telescopes will be watching live when asteroid 2011 UW-158 passes 30 times closer to us than the nearest planet, on July 19

Although asteroid mining is a goal for near-future for space exploration, we don’t have the technology right now to mine one. What’s more, even at it’s closest approach, the asteroid will still be 2.4 million km (1.5 million miles) from Earth - that’s about six times farther than the Moon.

At a size of roughly 457-metres (1,500-feet) wide, spotting this asteroid will be like trying to see an object one hundredth of an inch wide from a mile away. You won’t be able to see it with the naked eye.

Luckily, the online observatory, Slooh, will be using their team of telescopes in the Canary Islands to spot the asteroid as it flies by, and they will be broadcasting the views online.

The broadcast will start at 10pm UTC on Sunday (6pm ET on Sunday and 8am AEST on Monday) and will include commentary from host Eric Edelman and Slooh astronomer Bob Berman about the asteroid and the lucrative material it harbours. You can watch the broadcast in the live feed provided at the end of this post.

"It’s always fun when an asteroid whooshes past our world," Berman said in a Slooh announcement. "What makes this unusual is the large amount of platinum believed to be lurking in the body of this space visitor. Can it be mined someday, perhaps not too far in the future?"

Asteroid mining could be an extremely useful business for agencies like NASA, which hopes to capture an asteroid and bring it in orbit around the Moon soon enough for future astronauts to visit it and collect samples by as early as 2025.

NASA says that the materials frozen in asteroids could "be used in developing the space structures and in generating the rocket fuel that will be required to explore and colonise our solar system in the twenty-first century".

Check out the live Slooh broadcast below starting at 10pm UTC on Sunday, July 19 (6pm ET on Sunday or 8am AEST on Monday, July 20):