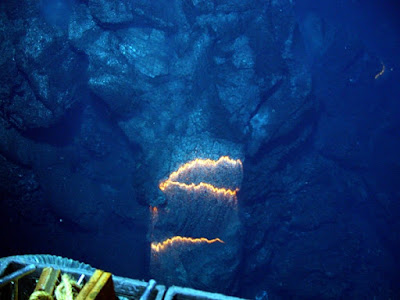 An underwater volcano north of Grenada is showing a decline in seismic activity, authorities on the eastern Caribbean island said Saturday.
Grenada's National Disaster Management Agency said it expects to lower the alert level from orange to yellow if that pattern continues.

Seismic activity recently increased at the Kick 'em Jenny volcano, with authorities warning on Thursday that an eruption could occur within 24 hours. But the Seismic Research Center at the University of the West Indies said there had been fewer than 20 earthquakes associated with the volcano between Friday afternoon and Saturday morning.

"This represents a significant decline in the level of earthquakes associated with the activity so far," the center said, adding that it would continue to monitor activity.

The volcano's recent heightened activity prompted authorities in the Caribbean region to issue alerts, but officials at the center said there was no risk of a destructive tsunami.

"There is no need for panic," the center said. "People should go about their daily lives as normal."

The volcano has erupted beneath the Caribbean Sea at least 12 times without causing any deaths or injuries. The last eruption occurred in 2001.

Kick 'em Jenny was discovered in the 1930s and rises 1,300 meters (4,265 feet) above the seafloor on a steep slope of the Lesser Antilles ridge.