Beneath dangerous Ecuador volcano, only a few linger 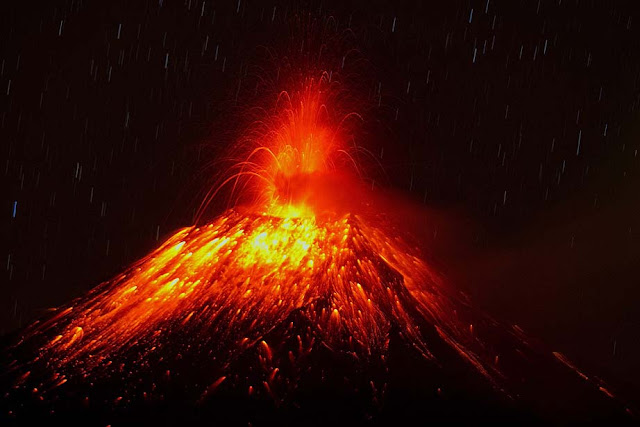 Bursts of ash spew from the snow-encircled crater of the Cotopaxi Volcano and fall in gusts on this village where the locals struggle to herd sheep and cattle to safety.

Capped by glaciers, the 19,350-foot (5,987-meter) volcano is one of the world's most feared due to its location just 30 miles (50 kilometers) from the Ecuadorean capital Quito.

Although officials say there currently is no such risk, a major eruption could hurl rock and mudflows into zones that are home to more than 300,000 people. The government has set a yellow precautionary alert, the lowest of three levels.

Plenty of Ecuadoreans have been on edge since Cotopaxi began belching ash a week ago in columns more than 2 miles high, prompting President Rafael Correa to declare a state of emergency.

On Saturday, explosions inside the volcano caused by magma meeting water sent a cloud of steam and ash more than a half mile (kilometer) above its rim.

A day earlier, the volcano's penetrating sulfurous gases burned the nose and throat of Marco Toctauano, 32, as he chased a sheep down the mountain.

The surgical mask shielding his nose and mouth was of little help little. The crater is less than 2 miles away.

"We have cattle up on the mountainside. There's no more we can do," he said Friday. "With the ash, they're suffocating and could be dying. We're pretty bad, too." 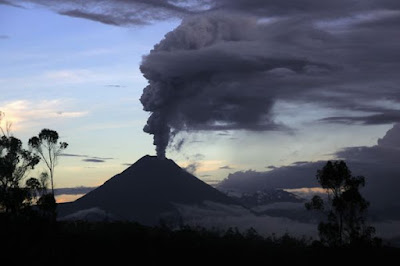 Toctauano figures he's lost 17 or 18 head of cattle worth a total of some $7,500. A lot more could be lost if Cotopaxi were to blow.

All but a quarter of Ticatitlin's 200 residents have evacuated. Those who remain are mostly elderly, like 84-year-old Adelaida Iza. She is more or less resigned to fate, noting as she cut alfalfa for her animals: "If the volcano blows, we're dead."

Cotopaxi, which began to stir anew in April, saw its last major eruption in 1877, when it claimed more than 1,000 lives in a fast-moving flow of mud and debris, a destructive event known as a lahar.

Ecuador's state of emergency allows the government to immediately assign funds for emergency measures but also includes elements that have drawn criticism from free speech advocates, such as suspension of the right to assemble.

Also coming under criticism was Correa's insistence on censorship. Only the government may give information on Cotopaxi. A volcanologist at the state Geophysics Institute who normally provides The Associated Press with details on eruptions said he was afraid he'd lose his job if he commented.

The government has identified potential shelters and sent police door-to-door in vulnerable areas. The hope is to ensure people are prepared to evacuate if needed, such as having emergency backpacks packed with food and first aid kits.

Mayor Marcelo Tapia of San Ramon, a community on the volcano's skirt that also is threatened, told AP journalists that more and more people were leaving the village.

"We're worried. We're more worried than ever," he said. "We don't know when disaster might strike."