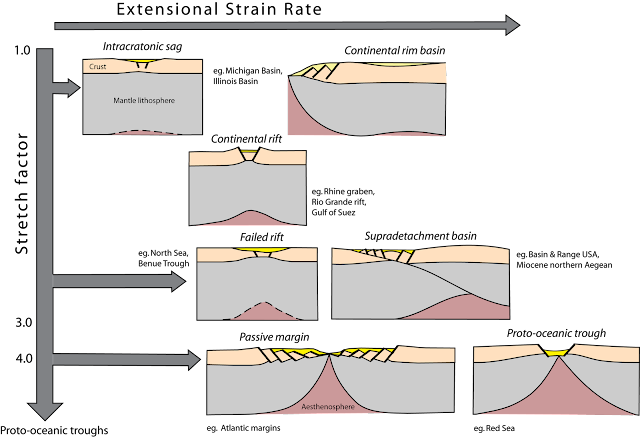 A rift is a linear zone where the Earth's crust and lithosphere are being pulled apart and is an example of extensional tectonics.

The early stages of continental break-up are accomplished by normal faulting and produce rift systems.
Active rifts are long and narrow depressions on the earth crust; they are characterised by seismic activity down to depths of ca. 15 km, high heat flow, and topographically elevated shoulders due to flexural isostatic compensation of the lithosphere. Some of the best examples comprise the Red-Sea, the African Great Rift Valley and the Gulf of Aden that meet in a triple junction in the Afar region. Rifting produces long and linear crustal depressions that are sites of extensive sediment accumulation and whose characteristics are:

A relatively narrow width (30-60 km), which is about the thickness of the rifted continental crust, irrespective of the length of the rift valley. Since active rift zones are initially elevated above the sea level, syn-rift sediments are often continental or lagoonal and strongly influenced by syn-rift volcanism in places. Huge down-dropped blocks are sites of continental basins, which are filled by thick (> 1 km) clastic debris derived from adjacent high-standing blocks and deposited in alluvial fans. These sediments impart the relatively flat topography of the rift valley although they are deposited within an irregular pattern of partial deposition centers. Major lakes and rivers are common in this central depression.


Steep and subparallel flanks are 3–5 km higher than the rift floor; this outstanding landscape feature results from cumulated normal-fault scarps, with the faults stepping down towards the central lowland. Some of these faults are very long but most of them relay each other, occasionally in an en échelon manner. Shoulder uplift arises from the mechanical unloading of the footwall block. Isostasy calculations indicate that the total relief of a rift wall is about 2.25 times the uplift. The amplitude of the uplift as well as the width of the rift flank uplift is determined by the elastic thickness of the lithosphere Te. The width of the shoulders varies from 80 km for Te=15 km (Rhine Graben) to 200 km for Te =50km (Baikal).


Rifts are not equally deep all along their length. Thinning of the continental crust usually occurs on a series of sub-planar to listric faults with a throw of several km. Rifts bounded by such serialized faults are cut into segments and comprise an assemblage of half-grabens of varying polarity, arranged end-to-end or side-by-side, and linked through cross-rift accommodation zones.

The dimension of the half-graben is determined primarily by the thickness of the seismogenic brittle crust, and is typically 25-100 km long and 20-50 km wide. Fault-bounded, long and narrow basins develop on the rift-parallel extensional blocks that rotate about a horizontal axis as the rift zone widens.

Alluvial and fluvial early-rift sediments pass upward into shallow and deep lacustrine facies (conglomerates, sandstones, coal, fine-grained mud) where intermittent lakes occur along the axis of the basin. As the rift widens, its floor further subsides and eventually sinks at sea level. At this stage, the sea that covers the basin is very shallow and may dry up. Evaporites precipitate in this environment. With continued extension the basin broadens and deepens, thereby becoming a narrow ocean in which marine strata bury the evaporites.


Normal faults accommodating continental crustal pull-apart and accompanied by parallel dyke swarms and outpouring flows of both tholeiitic and alkaline basalts. Mounts Kenya and Kilimandjaro are big volcanoes that exemplify this magmatism. Partial melting of the granitic crust may produce rhyolitic magma.

The bimodal association of acid and basic volcanic rocks is characteristic of within-continent rift systems. In fact, magmatic rocks show a great range and also include extreme compositions that are rarely found outside rifts such as extremely sodic and potassic rocks, often rich in carbonate. The carbonatite complexes of East Africa are considered to be the subvolcanic equivalents of such unusual volcanoes, which erupt sodium carbonate lavas and ash (Oldoinyo Lengai, in Tanzania).


Post-rift, thermal subsidence is initiated by cooling of the asthenospheric material that was upwelled to lithospheric levels during rifting. The post-rift sediments are mostly marine, pelagic and poor in terrigenous material. The thermal subsidence seizes wide zones beyond the rift zone itself, but the syn-rift rugged morphology of the basin may be still reflected by various types of sediments.