Find Your Birthstones And Get Interesting Facts About Them I 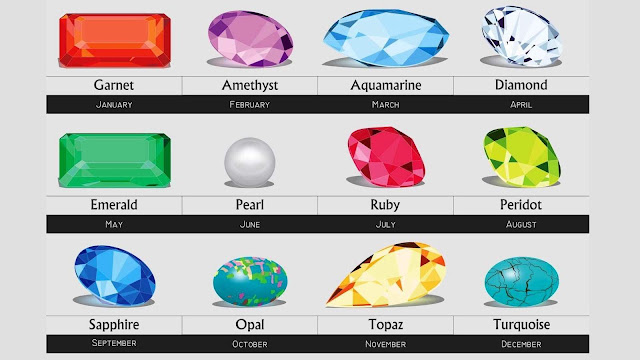 Birthstones and their vivid colors have long been a way to connect your birth month with rare and unique gemstones. They are a meaningful gift for mom, a friend, spouse, or family member during a special occasion. But they mean much more than that as you'll find out below.

A Gemstone popularly associated with the month or astrological sign of one's birth. 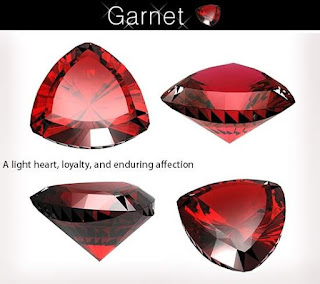 Garnet, the birthstone of January, is mined in a rainbow of colors. From the fiery orange of Mandarin Garnet to the rich green of Tsavorite Garnet and to the most widely recognized color of Pyrope Garnet, it is considered a great gift to symbolize friendship and trust.

Geological Information:
Garnets are a group of silicate minerals that have been used since the Bronze Age as gemstones and abrasives. 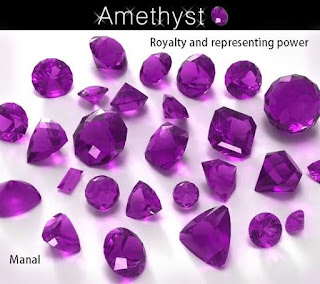 Amethyst, the birthstone of February, is a variety of Quartz that carries a spectacular purple color that ranges from a blend of deep violet and red to a lighter lilac hue. Ancient Greeks believed that the stone protected the wearer from drunkenness and enabled them to keep a balanced mindset. 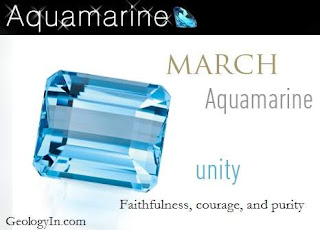 Aquamarine, the birthstone of March, has a rich color and has long been a symbol of youth, health and hope. Its mesmerizing color ranges from pale to deep blue and are reminiscent of the sea. A perfect birthstone for March, the Aquamarine creates a beautiful accent to spring and summer wardrobes. Aquamarine is the gem of the 19th wedding anniversary.

Geological Information:
Aquamarine (from Latin: aqua marina, "water of the sea") is a blue or cyan variety of beryl. It occurs at most localities which yield ordinary beryl. Naturally occurring, hexagonal crystals of beryl can be up to several meters in size, but terminated crystals are relatively rare.
Formula: Be3Al2Si6O18
Colour: Blue 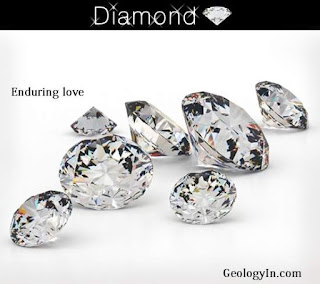 Diamonds, the birthstone of April, are commonly associated with love which make it the perfect gift for a loved one. While white diamonds are most common, fancy colored diamonds can be found in various colors including yellow, blue, pink and a variety of others as well.

Geological Information:
Diamond is a metastable allotrope of carbon, where the carbon atoms are arranged in a variation of the face-centered cubic crystal structure called a diamond lattice. Diamond is less stable than graphite, but the conversion rate from diamond to graphite is negligible at standard conditions. Diamond is renowned as a material with superlative physical qualities, most of which originate from the strong covalent bonding between its atoms.

In particular, diamond has the highest hardness and thermal conductivity of any bulk material. Those properties determine the major industrial application of diamond in cutting and polishing tools and the scientific applications in diamond knives and diamond anvil cells. 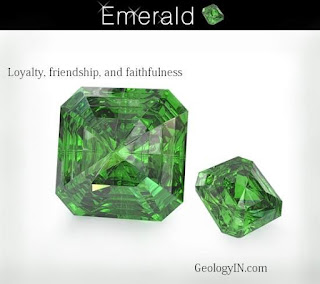 Emerald, the birthstone of May, carries the rich green color of Spring and radiates a beautiful vivid tone. They are considered to be a symbol of rebirth and love. Emeralds are the rarest gemstones and are typically mined in Colombia, Brazil, Afghanistan and Zambia.

Geological Information:
Emerald is a gemstone and a variety of the mineral beryl (Be3Al2(SiO3)6) colored green by trace amounts of chromium and sometimes vanadium. Emerald  has a hardness of 7.5–8 on the Mohs scale. 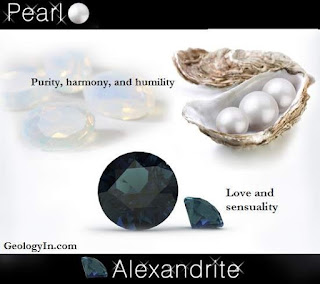 June birthdays claim two birthstones; pearl and Alexandrite. Pearls have been wildly popular in jewelry for centuries because of their natural beauty. Alexandrite gemstones are extremely rare and desirable since they change color based on the lighting.

Geological Information:
Alexandrite is the highly regarded color changing variety of Chrysoberyl. The color of Alexandrite changes under different lighting conditions. If viewed in daylight, its color is greenish blue to dark yellow-green. If viewed in incandescent or candle light, its color is pink to red. Alexandrite is a very rare and highly valuable gemstone, and until recently was extremely difficult to obtain due to its rarity.
Formula:  BeAl2O4
Mohs scale hardness : 8.5


Read the Rest: Birthstones II: Discover Your Birthstone Color By Month
Share to: