Simulating path of 'magma mush' inside an active volcano 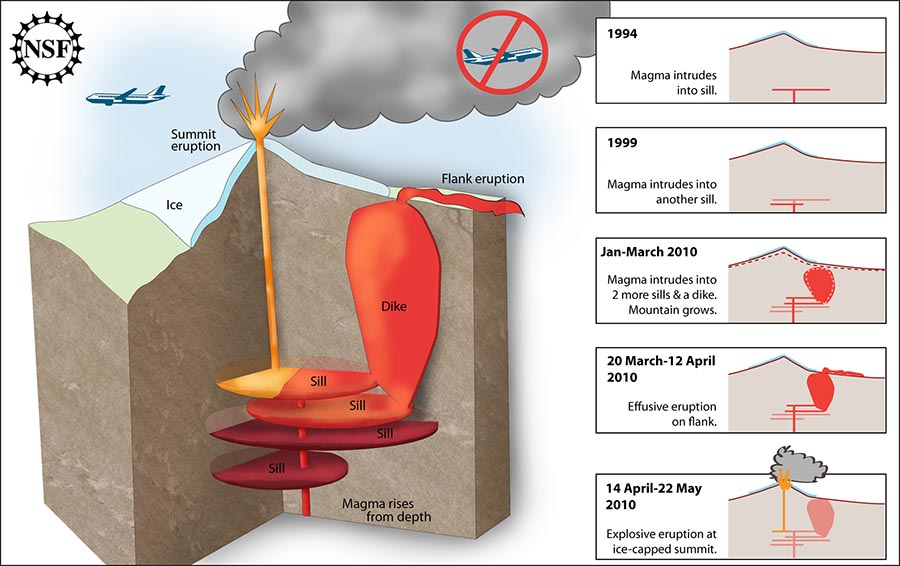 For now, such warning signs can only rely on external clues, like earthquakes and venting gases. But a University of Washington simulation has managed to demonstrate what's happening deep inside the volcano. The study, published Sept. 7 in Nature Geoscience, is the first to simulate the individual crystals' movement in the magma chamber to better understand the motion of the magma and buildup of pressure.

"The thing about studying volcanoes is we can't really see inside of them to know what's going on," said co-author Jillian Schleicher, a UW doctoral student in Earth and space sciences. "Whenever there's unrest, like earthquakes, gas emissions or surface deformation, it's really difficult to know what processes are taking place inside the volcano."

Each volcano has a unique personality. Volcanologists use the remains of past eruptions and previous warning signs to predict when it might blow. But those predictions are based on only vague understanding of the system's inner workings.

The idealized UW computer simulation could help volcanologists better understand how energy builds up inside a system like Mauna Loa, which is a focus of the UW group's research, to predict when it will erupt.

"This tool is novel because it lets us explore the mechanics," said first author George Bergantz, a UW professor of Earth and space sciences. "It creates an interpretive framework for what controls the movement, and what might produce the signals we see on the outside."

The team used a computer model originally developed by the U.S. Department of Energy to model fuel combustion. The UW group previously adapted the code to simulate volcanic eruptions and ash plumes; this paper is the first time it's been used to go down inside the volcano and examine the movement of each individual crystal.

A volcano is filled with "magma mush," a slushy material that is part magma, or liquid rock, and part solid crystal. Previous studies approximated it as a thick fluid. But capturing its true dual nature makes a difference, since the crystals interact in ways that matter for its motion.

"If we see earthquakes deep inside Mauna Loa, that tells us that there's magma moving up through the volcano," Bergantz said. "But how can we better understand its progress up through that plumbing system?"

The simulation shows the magma has three circulation states: slow, medium and fast. In the slow state, new magma just percolates up through the crystal pores. As the rate of injected magma increases, however, it creates a "mixing bowl" region where older crystals get mixed in with the new material.

"In these crystal-rich mushes, we know that we have magma going in and sometimes it might punch through [the layer of crystals at the bottom]," Schleicher said. "But we don't know how the mixing is happening or the timescales involved."

The current model is an idealized magma chamber, but with more computing power it could be expanded to reproduce a particular volcano's internal structure.

Now that researchers can simulate what happens inside a magma chamber, Schleicher will look at rock samples from Mauna Loa and analyze the layers in the crystals. Crystals preserve chemical clues as they grow, similar to tree rings. Matching the model with the crystals' composition will help recreate the rock's history and track how magma has moved inside Mauna Loa.

"Mauna Loa is a terrific place to study because it's very active, and the rocks contain a single type of crystal," Bergantz said. "What we learn at Mauna Loa will allow us to make headway on other places, like Mount St. Helens, that are intrinsically more difficult."