Ecuador and Japan earthquakes: Are they related? 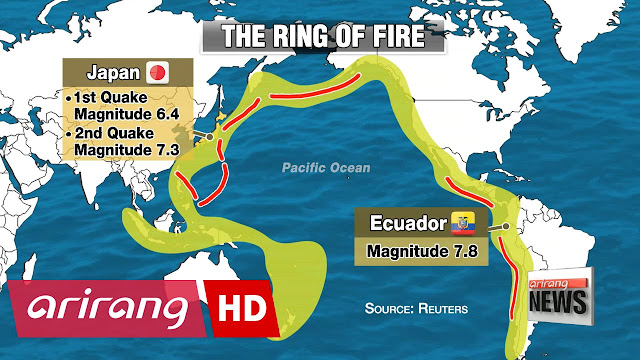 1. Are the Ecuador and Japan earthquakes related?

It's way too early to tell, said Paul Caruso, a geophysicist with the U.S. Geological Survey.
"It's one day after the Ecuador earthquake and two days after the Japanese earthquake, so no real research has been done on these quakes as far as they're being connected," he said Sunday.

"Usually we don't think earthquake are connected across the ocean," Caruso said, but there's ongoing research in "remote triggering," the idea that a big quake can cause another quake a long distance away.

2. What about the Ring of Fire?

Both quakes occurred in this horseshoe-shaped area the National Geographic Society defines as "a string of volcanoes and sites of seismic activity, or earthquakes, around the edges of the Pacific Ocean."

It may seem more than coincidental that the quakes occurred a few days apart. But it's also true that the large majority of the world's earthquakes -- about 90% -- occur in the Ring of Fire, per the National Geographic Society.

3. How do the Ecuador and Japanese quakes compare in power?

The Ecuador earthquake was almost 16 times stronger than the Saturday morning quake in Japan.

4. Is this Ecuador's strongest earthquake?

No. On January 31, 1906, a magnitude-8.8 quake occurred off the coast of Ecuador and Colombia, generating a tsunami that killed 500 to 1,500 people, according to the USGS website. The quake was first measured at magnitude-8.2.

5. How often do quakes of this power occur?

Quakes with a magnitude between 7.0 and 7.9 occur about 15 times a year, according to information collected by the USGS over the decades.

The bigger ones -- magnitude-8 and over -- happen about once a year.


This article was writen by By Ralph Ellis, CNN
Share to: